From the inspired mind of record producer Hal Willner comes another offbeat evening of music celebrating the 20th anniversary of Stay Awake. Willner’s historic compilation of music from the Vintage Disney Songbook features work by an eclectic range of artists from Suzanne Vega and Los Lobos to Ringo Starr and Bonnie Raitt. The soon-to-be-announced lineup will include many of the album’s original performers in this one-time-only event. Best known for a groundbreaking series of multi-artist tribute albums interpreting the work of composers such as Nino Rota, Kurt Weill and Thelonious Monk, Willner set out to match surprising material with extraordinary musicians from the nether regions of pop, rock, jazz and the avant-garde. The concert features a mix of enchanting, moody and, at times, sardonic adaptations of tunes from The Jungle Book, Snow White, Dumbo, Alice in Wonderland, Pinocchio, and more.
Posted by Christopher B. Eddy at 10/16/2008 06:50:00 PM 1 comment: 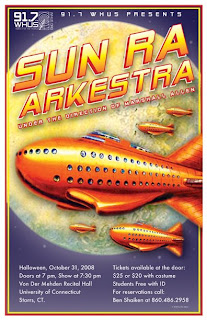 91.7 WHUS Presents
The Sun Ra Arkestra
Under the Direction of Marshall Allen 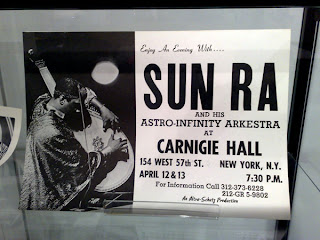 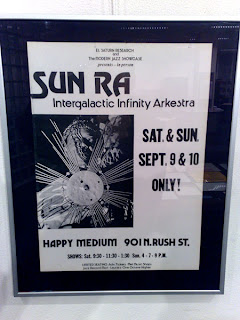 A rare chance to witness the outernational, innerspace cosmonauts live in the unsuspecting Dutch town of Tilburg. We arrived in Tillers, downed a quick La Chouffe, then T-dance and me checked out the local library’s exhibition of Sun Ra promo material, original LP cover designs and screenprints. The big band was comprised of new and old faces, led by the 84 year-young elfen-wizard band leader Marshall Allen. The Arkestra played for three hours and transmitted beta waves and beta music through all present. Beta music for a beta world.
Posted by Steve Antonelli at 10/08/2008 10:46:00 PM No comments: 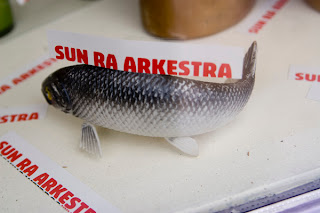 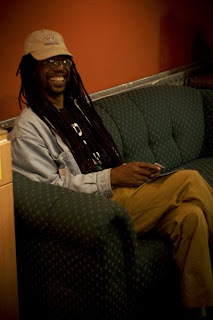 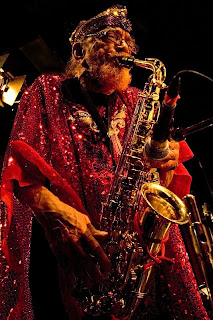 Born in Summit, Miss. on Sept. 28, 1931, Gilmore studied clarinet as a teenager after moving to Chicago at age three. He had a stint from '48-'51 as a clarinet soloist in Air Force bands. Like so many great Chicago musicians, he studied under Captain Walter Dyett at Du Sable High School. On tenor, he toured in 1952 with the Earl Hines Orchestra as part of a road show accompanying the Harlem Globetrotters. In 1953, Gilmore became one of the initial members of Sun Ra's quickly expanding Arkestra, alongside fellow-saxophonists Pat Patrick and Marshall Allen.

Gilmore was a key element of early Arkestral maneuvers, playing on their first record, “Jazz By Sun Ra", released in 1957 on Transition (available on the Delmark disc “Sun Song"), and on the initial offerings from Ra's prototypic independent label, Saturn; in the end, he had appeared on nearly all of Ra's 150-plus records. Along with tenor and clarinet, Gilmore played drum kit when needed, and his startling early use of bass clarinet can be heard on “Dimensions In Time" on “Fate In A Pleasant Mood/When Sun Comes Out" (Evidence).

When the Arkestra relocated to new York in the early '60s, there was little work for the huge vanguard ensemble, so the members took more side-gigs than usual; at this time, Gi lmore played o n Impulse! Records with McCoy Tyner and Freddie Hubbard, and elsewhere with Elmo Hope, Paul Bley, Pete La Roca, Andrew Hill and Blakey. During one of Gilmore's first New York performances at Birdland, Coltrane ran up to the stage after his solo yelling, “He's got it! Gilmore's got the concept!" By his own admission, Coltrane--who asked for a quickie lesson after the set--was so moved by Gilmore's harmonically ingenious, against-the-grain style that it inspired him to create the groundbreaking “Chasin' The Train."

The festival is also dedicated to the late Woodville, Mississippi native and jazz legend Lester “Prez" Young. “Lester Young is the father of the modern jazz saxophone and was born August 27, 1909 and died in 1959, after a historic career as one of the most influential jazz musicians of all time," states Dr. Myers. “Billy Holiday gave him the title “Prez", short for President of the tenor saxophone."

Dr. Myers will be performing original compositions from his critically acclaimed jazz CD, “Doctors Orders". The CD includes popular original Mississippi Delta jazz compositions like “Song For Tchula", “Message From the Country" and “Blues For Tchula".

Rachella Parks, one of the top female jazz saxophonist in the world, will be the featured guest artist. Jazz bassist “extraordinaire", Dr. London Branch, retired professor of music and former Director of the Jackson State University Orchestra, whose birthday is also on September 28th, will be performing along with accomplished Mississippi jazz drummer Al Fielder. Jackson, Mississippi native, percussionist Wilton Knott, and jazz drummer and percussionist Aye Aton, formerly with the legendary Sun Ra Arkestra.

Admission is free and donations are appreciated. For more information contact Summitt City Hall at 601-276-9536.

The Mississippi Jazz & Heritage Festival is a cooperative effort sponsored by: