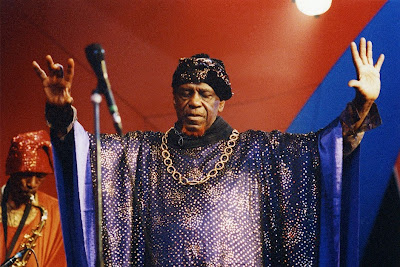 Sun Ra organized The Arkestra sixty years ago as a platform to render a vision that simultaneously drew on the ancient and the modern, incorporating elements of black vaudeville, modern dance, Egyptian cosmology, Eastern philosophy, numerology, surrealism, kitsch, and the Bible. The Arkestra served as a canvas on which Sun Ra deployed African rhythms, atonal melodies, electronic timbres, raw blues expression, and unfailing swing, framed by one-for-all discipline. Sun Ra lives on in the current edition of the ever-changing Arkestra, led by alto saxophonist-woodwindist Marshall Allen, a founding member of the Arkestra in the laste ‘50s.

This show will also feature visual artist Michael Arthur creating live pen and ink artwork inspired by the performance. These real time works of art will be projected above the stage to underscore Sun Ra’s persistent modernity. Combining music and fine art, Sun Ra Turns 100 promises to be a most memorable journey.

As Marshall Allen said, “Sun Ra always said his music was from the 21st Century and here we are!”

Free pre-concert discussion at 6pm and 8:30pm in Jazz at Lincoln Center’s Irene Diamond Education Center. Sun Ra Turns 100: Sun Ra Arkestra with Marshall Allen will stream live on October 5 at 7 and 9:30pmET on jalc.org/live. Ticket prices for The Allen Room start at $45.
Posted by Christopher B. Eddy at 10/15/2013 08:49:00 AM No comments:

Outside Jazz at Lincoln Center’s Allen Room on Saturday, I overheard a question before the Sun Ra Arkestra’s debut appearance in the hall. “What era do they play?” a man asked a companion, referring to the many of styles of music that Sun Ra—the bandleader, pianist, composer, and philosopher—covered during his four-decade career. The answer sounded confident: “Oh, they play everything.”

That turned out to be correct. Though Ra died in 1993, today his Arkestra—“the way black people say ‘orchestra,’” the composer once explained—is led by his longtime lieutenant, the saxophonist Marshall Allen, under whom it still conjures great mystery and power. The 20-member ensemble (including harp, electric guitar, cello and viola), played early, bluesy works like “Deep Purple,” more mature big-band charts like “Saturn,” and also intense flights of group free-improvisation paired with acrobatic dancing and real-time paintings that were projected on a screen attached to the Allen Room’s glass wall (a large-scale monocle that peers down over Columbus Circle). In each piece, Farid Abdul-Bari Barron, who has taken over the composer’s role as the Arkestra’s keyboardist, was adept at evoking Ra’s style of playing, variously incorporating brisk runs of stride playing or dissonant Moog blasts.
It was a welcome sight, this Arkestra’s appearance at Jazz at Lincoln Center—an institution with a grand tradition of celebrating Louis Armstrong and Duke Ellington, but which has historically stopped short of offering much attention to the avant-garde. Aside from being an excellent night that offered plenty of the advanced hard-swing that Thelonious Monk appreciated back in the day, it was also an important recognition of Ra’s contribution to jazz history.
Throughout his career, popular acclaim largely eluded Ra, while critical acclaim was inconstant. Many dismissed him for his outlandish and theatrical performances (he and the Arkestra wore homemade space suits, and their shows often included singers, dancers, and acrobats) as well as for his equally outlandish persona (he claimed to have been born on Saturn). He nevertheless had a devoted following, listeners who were delighted to find a joyful avant-garde music that, instead of sounding astringent, reverberated with soul. The appeal can easily be heard in “Interplanetary Music,” best recorded in 1960 for the Interstellar Low Ways album. Some band members chant, others provide convivial vocal harmony, while instrumentalists play sounds alien to most Western music.
Though Ra was an idiosyncratic and experimental composer, he also had roots in some of jazz’s earliest traditions. Born Herman Poole Blount (he later took the nickname Sonny) in Birmingham Alabama in 1913, he grew up listening to blues singers like Ethel Waters and Bessie Smith. Swing music—Duke Ellington’s band in particular—was also a formative influence, as can be heard in a 1933 recording of Ra’s song “Chocolate Avenue,” performed by the Clarence Williams Orchestra. Jodie Christian once described Ra’s early public presentation as that of a “a good pianist, playing conventional piano, stride.” By the late 1950s, his solo approach to acoustic piano took on a purposefully plunking sound, reminiscent of Thelonious Monk, but still quite distinct, as can be heard on Ra’s solo reading of the standard “Easy Street” (on the album Monorails and Satellites).

Sun Ra as we know him emerged in Chicago in the 1940s. After a harrowing experience applying for conscientious objector status during World War II briefly landed him in jail, Ra—then still called Sonny Blount—moved to Chicago, where he worked as an arranger for one of his idols, the big band leader Fletcher Henderson. Chicago at that time was a hotbed of African American political activism, including, among others, groups like the Black Muslims and the Black Hebrews. This fascinated Blount, who, amidst feelings of deep racial alienation, began to read the mystic texts and Egyptian histories from which he would derive his Sun Ra persona. In 1952, Sonny Blount took a new name: Le Sony’r Ra.
At about the same time he founded the Arkestra. The group’s earliest recordings from these years sound surprisingly like traditional big band tracks when compared to their later works, yet even here there are subtle innovations and hints at what was to come. One early track, “India” (from the album Super-Sonic Jazz) makes use of electric piano long before the first “fusion” albums of the late 1960s. Another, slightly later recording, “Brainville,” features an oddly insistent baritone-sax note amid the Arkestra’s other, Ellingtonian accents. Perhaps most affecting is Ra’s solo keyboard track, “Advice to Medics,” titled after his history of playing for what his biographer John Szwed describes as a therapy-through-music group that “included catatonics and severe schizophrenics.” (The biographer reports that one patient, breaking a years-long silence, approached Ra to ask: “Do you call that music?”)

Sun Ra’s music became most abstract in the 1960s, when he and the Arkestra moved to New York and took up a residency at the East Village club, Slug’s. This is where Amiri Baraka (then LeRoi Jones) encountered the Arkestra. Though initially skeptical, he was won over as soon as he saw the group live. “Sun-Ra,” he wrote in 1966, “wants a music that will reflect a life-sense lost in the West, a music full of Africa.…On one piece the Arkestra moves, behind Sun-Ra, in a long line through the dark, chanting and playing…a totally different epoch is conjured.” Baraka described Ra’s new record for the ESP label, The Heliocentric Worlds of Sun Ra, as “one of the most beautiful albums I have ever heard,” the product of the “first big band of the New Black Music.”
In the 1970s, the band’s recording catalog began to sprawl even more chaotically as it toured Europe, releasing a number of live albums. Not all are essential, though the two volumes of The Solar Myth Approach show Ra’s impressively abstract playing on the Moog synthesizer. The grooving late 1970s albumLanquidity betrays an influence of R&B, but it’s the recently reissued Disco 3000that I found myself enjoying most, during a recent Ra binge. (It’s not actually very disco at all: the track “Sky Blues” offers some prime down-home riffing.)
The prospect of getting to know this massive, erratically organized oeuvre may seem discouraging. But giving up on the ability to know everything doesn’t mean you have to resign yourself to total ignorance, either. That realization is a part of what is so welcome about Jazz at Lincoln Center’s embrace of the Sun Ra Arkestra this month. Szwed’s biography, Space is the Place, makes mention of the fact that Lincoln Center’s then-“new jazz department” considered, but ultimately did not produce, a tribute concert to Ra not long before his death. Though by doing their part, now, to include his Arkestra in our understanding of American art music, the institution is helping to realize a mystic-sounding assertion from Ra’s later years: “A true birthday is the day of your death.” 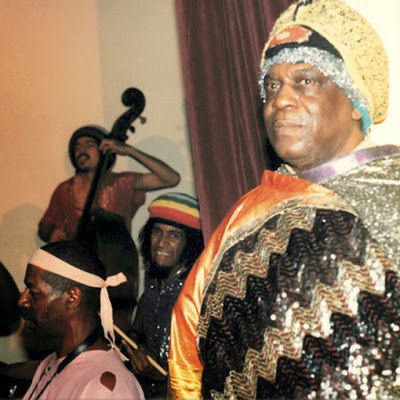