We turned this episode of XLR8R TV over to filmmaker Peter Glantz, who went to Providence, Rhode Island's Foo Fest to take a closer look at the festival's two main attractions—Lightning Bolt and Sun Ra Arkestra. Lightning Bolt, Providence's epic noise duo headed up by Brian Chippendale and Brian Gibson, is known for surprising, chaotic, often transcendent performances. Sun Ra Arkestra became legendary in the jazz world under the leadership of cosmic philosopher and organist Sun Ra from the mid-1950s until his death in 1993. Today, the Arkestra continues to flourish and promote the cosmic philosophy of Sun Ra under the direction of alto saxophonist Marshall Allen. Here, Glantz captures both their live performances and meditates on the spiritual alliance between these two far-flung musical compatriots.
Posted by Christopher B. Eddy at 9/24/2009 03:59:00 PM No comments: 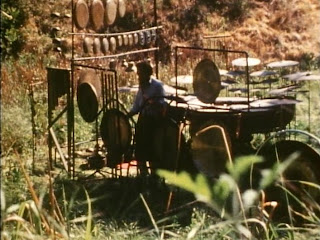 Join us for this special and spectacular Halloween performance of the Sun Ra Arkestra. Founded in 1958 under the leadership of Sun Ra, the Arkestra pioneered a unique brand of afro-futurism, forging intersecting musical pathways that explore outer space and Egyptian
mythology. Drawing on the work of Duke Ellington and Fletcher Henderson, the Arkestra are pioneers of the bop-derived avant-garde and collective improvisation. Their work has had tremendous impact on scores of musicians including MC5, Sonic Youth and George Clinton. Following the Arkestra's influential tenures in Chicago and New York City, Sun Ra and the Arkestra relocated to Philadelphia in 1968, where they continue their commitment to the study, research and development of Sun Ra's musical precepts. Following the ascension of Sun Ra in 1993 and John Gilmore in 1995, Maestro Marshall Allen (b. 1924) has launched the Sun Ra Arkestra into a dimension beyond that of mere "ghost" band by writing fresh arrangements of Sun Ra's music, as well as composing new music and arrangements for the Arkestra.
Posted by Christopher B. Eddy at 9/13/2009 10:17:00 AM No comments: