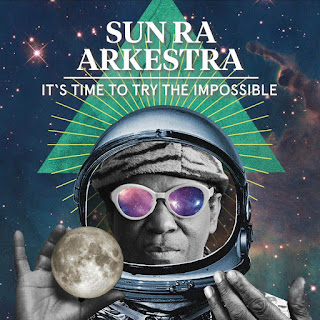 Of all of the beloved stalwart Sun Ra Arkestra members - from John Gilmore to Marshall Allen and June Tyson - none has received their own biography to date. Laurdine "Pat" Patrick is perhaps the most qualified first subject for his own book, because he had such a long, diverse and independent life outside of Sun Ra's sphere.

Now Bill Banfield, currently Director of the Center for Africana studies and professor at the Berklee College of Music, gives focus to Pat Patrick's fascinating life with his book that draws from diverse sources such as historical reportage, interviews with family and peers, excerpts from Patrick's journals and the extensive lists he kept of his professional accomplishments.

For long time devotees of Patrick's robust and expressive baritone saxophone playing that always wanted to know more about the person and his work, Banfield's book illustrates a well-rounded and complex picture of the soft-spoken musician's life and greatly expands our understanding of the man. By letting the source material speak for itself, Banfield doesn't bring his personal agenda to the subject, allowing readers to have their own unique emotional experience and interpretation.

"Pat Patrick: American Musician and Cultural Visionary" provides an insightful cultural perspective of the artist's times as an educated, thoughtful and principled African-American artist in the 20th century. The author gives context to the societal obstructions and aspirations Patrick gave uncompromising - yet graceful - voice to through his work, while always maintaining pride and humanity.

Through interviews with Patrick's family, the book tells the unflinching story of the affects his life choices had, and the emotional and philosophical lessons his children learned from them. Professor Banfield gives space to their individual stories and lets their words speak for themselves without imposing his own interpretation.

For the first time in print, aspects of Patrick's career that were previously unchronicled are collected. Apart from it's human story, it is the book's most substantial contribution to Sun Ra scholarship. From the Pat Patrick Band's 7" single of "I Ain't Done Nothing To You" backed with "Hot Springs," the Andrew Hill Combo's 45 featuring Pat's composition "Down Pat," and Coleman Hawkins' performance of Patrick's "A Tune For The Tutor," to his compositions and performances with Mongo Santamaria, Johnny Zamot and James Moody, discovering these songs for the first time may be the greatest joy listeners will get from this story.

Devoted Sun Ra fans will likely approach this book hoping for a focus on Pat's time with the Arkestra and previously unheard stories. However, the book takes a different perspective and seeks to provide a more complete appreciation of the human being himself, not only as a member of Sun Ra's band. Ironically by not meeting preconceived expectations, it greatly exceeds them, offering a pleasantly surprising read and a far deeper learning experience.

This album is a must-own release for students of Sun Ra, not as a rarity, but as a bonafide part of the cannon.

Side A:
Stablemates (Intro)
Funny Time
Uptightedness
Eastern Vibrations
Side B:
Sabia
East Of Uz
The Waltz
Stablemates, pt. II

The 1977 LP release of Pat Patrick and The Baritone Saxophone Retinue's "Sound Advice" has always been a rare and sought after release for hardcore Sun Ra collectors. So rare in fact that for the last 25 years the only copy I ever heard was from a cassette dubbed by one of the lucky few owners of this unique and thoroughly compelling album.

This represents Laurdine "Pat" Patrick's only full-length release as a co-leader, along with the Arkestra's Charles Davis, as well as the The Baritone Saxophone Retinue's single recording. Patrick had released just one previous 7" single under his own name - "I Ain't Done Nothin' To You," backed with "Hot Springs" - on the Aladdin Records label in 1955.

In addition to his almost 40 year association as the second original member of the Sun Ra Arkestra, Patrick co-wrote the #1 hit "Yeh Yeh" (Mongo Santamaría, Lambert, Hendricks and Ross and Georgie Fame and the Blue Flames) and arranged Mongo Santamaría's Top 10 hit version of the Herbie Hancock composition "Watermelon Man," and played as a sideman with John Coltrane, Thelonious Monk and Babatunde Olatunji.

It seems significant that "Sound Advice" was originally released by Sun Ra's label, El Saturn Records. Other than 1968's "I Wish I Had A Wishing Ring" by Lacy Gibson, it is the only other release of the 100 plus titles in Sun Ra's catalog that didn't have Sun Ra's direct involvement as a performer or arranger.

For me, the significance is that this record feels like a long-lost Arkestra release. Live lo-fi recording? Check. An obscure previously unreleased Sun Ra 50's compositions called "East of Uz?" Check. Pressed in super-small quantities and impossible to find? Check. Spirited, sophisticated, and wildly swinging jazz that sounds like nothing else? Double check!

The fact that this album was recorded and released in the 1970s is puzzling. Compounded by the slightly removed far-away sonics of what appears to be a 2-channel stereo microphone recording, "Sound Advice" sounds like walking into a Chicago night spot in the late 1950s and opening the door on Sun Ra's Arkestra itself. The songs, the arrangements and the melodic and harmonic content all conjure the sound of the vintage Arkestra.

If you put this side-by-side with Atavistic's release of "Music From Tomorrow's World," recorded live at Chicago's Wonder Inn, in a blind listening test, you'd be hard pressed to not think it was possibly the same band if you didn't know any better.

This album is a must-own release for students of Sun Ra, not as a rarity, but as a bonafide part of the cannon. It makes me reassess how important and influential the original members of the Arkestra - like Pat Patrick - were to the overall personality of the band. Sun Ra was - of course - the leader, but I think that history has severely underestimated the importance and influence the individual musicians had on the music's magic and power.

One might think that a horn section made up of entirely baritone saxophones - with a touch of flutes - might be a novelty, but rest assured it is not gimmicky, but visionary. In fact, it's the most exciting baritone playing I've ever heard on record. The tight, swinging drum and bass accompaniment gives the band solid momentum and support, with the piano providing beautiful counterpoint and some great solos. The baritones are arranged with breadth and variety, and not boomy or squonky.

Art Yard Records did an incredibly admirable job with their 2015 release on LP and CD, as they have done with every single one of their releases. They were clearly working with a pretty clean vinyl copy as their master, but it is the best I've ever heard the album sound and a welcome replacement to the tape and CD-R copies most collectors have had access to in the past. The mastering is tasteful, with a light musical touch, and doesn't have audible artifacts of heavy-handed compression or de-noising.

Special kudos should be given for the limited-edition vinyl edition with sumptuous hand silk-screened artwork by L. Todd/House Of Traps, complete with double-sided inner sleeve notes and inner and outer poly sleeves. It is one of, if not THE, most beautiful and artistic record jackets in my collection. It makes the album feel as special and precious as it truly is.

Here's what Art Yard's Peter Dennett has to say about the release in an interview for FactMag:

Q: That record was something of a holy grail in the Ra catalogue, and you’ve also managed to unearth another huge piece which is set for release soon, right?

A: Yes! Recently I’ve signed some contracts with Deval Patrick, the governor of Massachusetts. His father, Pat Patrick, was one of the main players with Sun Ra, and also worked with John Coltrane and Thelonious Monk. He wrote music with Mongo Santamaria, the song ‘Yeh, Yeh!’” is a famous example. There is a record that he wrote that came out on El Saturn around 1980, that is now going on Ebay for 2500 dollars, which is just crazy.

So anyway I’ve set this thing up with the estate of Pat Patrick, and that record will come out properly later this year. It’s already been bootlegged, a year and a half ago, by someone in Europe I think, they were selling the bootlegs for between 170 pounds and 250 pounds – they must have made tens of thousands just by selling 100 records or so. So this is the thing, it’s about getting that music back out there into the world, doing it the proper way – I’m looking forward to putting that out properly.