What is the Sun Ra song "Circe" from When Sun Comes Out about?

In Greek mythology, Circe (/ˈsɜrsiː/; Greek Κίρκη Kírkē pronounced [kírkɛ͜ɛ]) was a goddess of magic (or sometimes a nymph, witch, enchantress or sorceress). By most accounts, Circe was the daughter of Helios, the god of the sun, and Perse, an Oceanid. Her brothers were Aeetes, the keeper of the Golden Fleece, and Perses. Her sister was Pasiphaë, the wife of King Minos and mother of the Minotaur. Other accounts make her the daughter of Hecate, the goddess of witchcraft herself.

Circe was renowned for her vast knowledge of potions and herbs. Through the use of magical potions and a wand or a staff, she transformed her enemies, or those who offended her, into animals. Some say she was exiled to the solitary island of Aeaea by her subjects and her father for ending the life of her husband, the prince of Colchis. Later traditions tell of her leaving or even destroying the island and moving to Italy, where she was identified with Cape Circeo.

Burgin Mathews is the co-author, with Frank Adams, of "Doc: The Story of a Birmingham Jazz Man." He hosts The Lost Child roots radio hour on Birmingham Mountain Radio.

Thank you for all of the years of beautiful music.

When I was a child I wanted to be three things when I grew up - an astronaut, an archeologist, and a musician. So, when I discovered Sun Ra, it couldn't have been more perfect.

Sun Ra was one of the greatest thinkers, artists, and musicians of all-time. He followed his inner voice and chose to fill the planet with beauty, love, and light against all odds. The debt of gratitude I owe him, and every single Arkestra member too numerous to mention, for the joy and knowledge they have shared with me is incalculable. Sun Ra, John Gilmore, and Marshall Allen changed the course of my life.

These words that Sun Ra recorded in 1956 have always resonated the deepest with me. "Dreams come true, they just have to - to prove they're so supreme. Mine came true, and yours will too - all you have to do is dream." 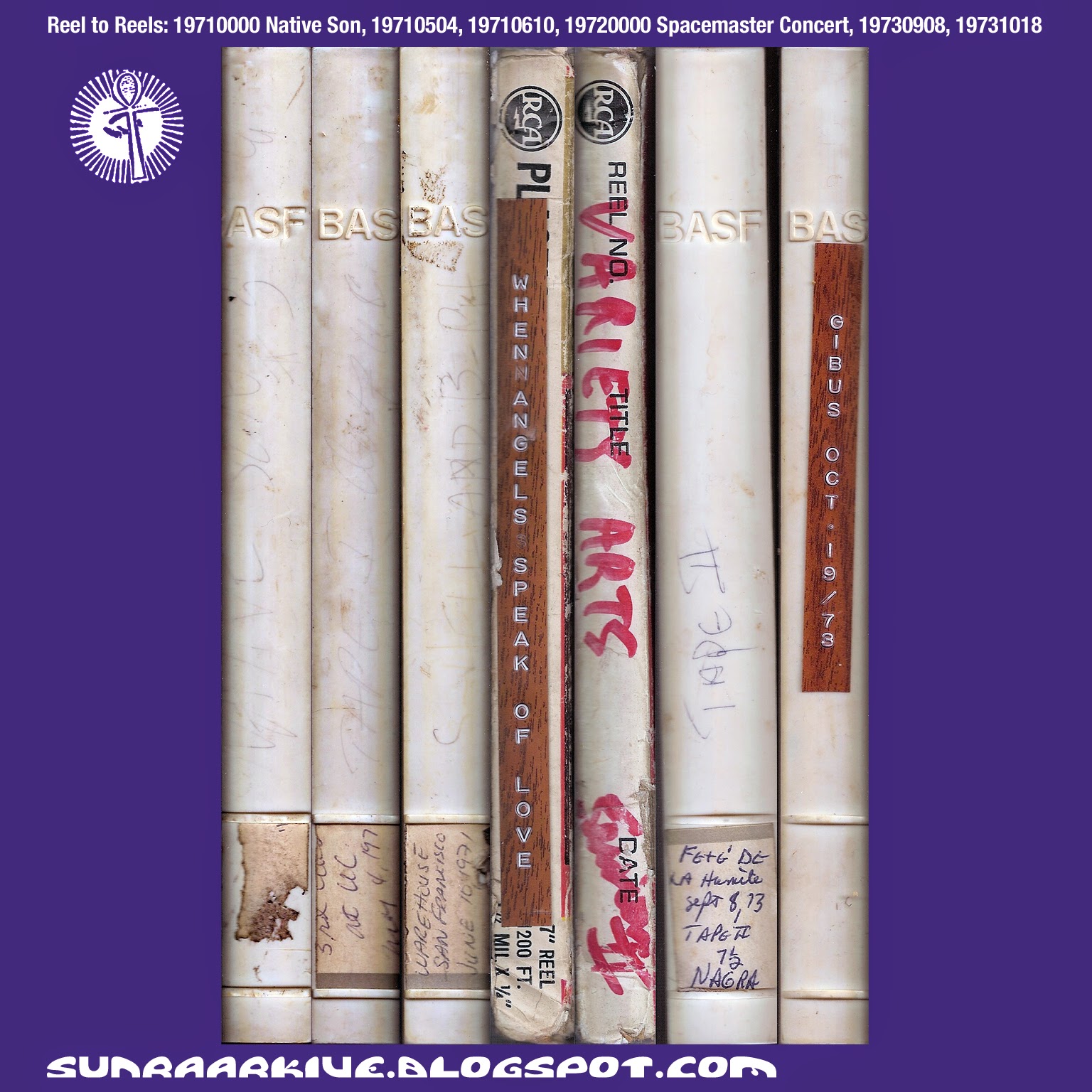 The Afro-futurists, Avant-gardist Band Leader, Composer, Poet and Philosopher Sun Ra who came from Saturn arrived on Planet Earth on 22nd May 1914. To celebrate his centenary of course many events will be taking place, from radio broadcasts from the followers of the Living Myth to releases and live performances, The Arkestra are on tour Travailing The Spaceways from Planet to Planet to mark this occasion, The Celestial Centenary Arkestra will take the stage again in London across Europe and America under the direction of Marshall Allen. The tour dates can be found here on the Sun Ra Arkestra website { http://www.sunraarkestra.com/1-main.html }

Art Yard will publish later this year the revised and expanded 2nd edition of Hartmut Geerken's wonderful Book Omniverse 'Hard Back' 300 pages aprox with many previously un-published photographs of Sun Ra's visit to Heliopolis, Cairo in 1971 and LP covers 'some hand drawn by Ra himself' to celebrate this years centenary of the Living Myth, its been 20 years since the 1st edition, with articles from Amiri Baraka, Robert Campbell, Chris Cutler, Salah Ragab, Hartmut Geerken and others, plus many more photographs taken by Val Wilmer on her visit to New York in 1966, Philadelphia and Germany in 1979. Sun Ra's discography is also being revised and updated by Chris Trent who compiled 'The Earthly Recordings of Sun Ra', so this will be much more then a 'coffee table' book , more of a reference art book and an important contribution to add to the list of publications about the work of Sun Ra from some of the people who were involved with The Living Myth over the years. Later on this year there will be more information about when the Omniverse book goes to press and where you can order it.

Art Yard has also been collaborating with the record company 'Strut' in order to celebrate the centenary of Sun Ra's arrival on Planet Earth and in March 2013, I visited Pharaoh's Den in Philadelphia 'The Sun Ra House' to film a series of interviews with Marshall and some of The Arkestra band members, the compilation release we put together 'In The Orbit of Ra' spans some 25 years of Sun Ra's work. This release features recollections and contributions from some of the core Arkestra line-up including Marshall Allen, Michael Ray, Knoel Scott and Danny Ray Thompson. For the music, the selection takes us through the huge variety and intricacy of the Arkestra’s work covering the ‘60s to early ‘80s, from the celestial blues of ‘Spontaneous Simplicity’ and ‘Plutonian Nights’ to the urgent jazz of ‘Rocket Number Nine Take Off For Planet Venus’ and ‘Dance Of The Cosmo Aliens’. The album features an exclusive previously unreleased track from the Art Yard archives, the acoustic ‘Trying To Put The Blame On Me’ recorded live in Rome in 1977. ‘In The Orbit Of Ra’ will be released on 2CD, 2LP and digital formats. Physical formats feature full interview with Marshall Allen. Initial quantities of the vinyl format will feature thick card sleeve, 180g vinyl.

Sun Ra created provocative philosophical constellations within his music and art to draw attention to black history and re-affirm the heritage of black culture, the captivating costumes and Egyptian references, the shadow worlds of his stage shows, The Nubians of Plutonia presentations with the 'New Forms' of music and possibilities unknown.

The magic of his existential Angel Race paradox Mr. Mystery, 'The Shaman or Magic Talisman' lives on.

Sun Ra's influence will continue to be felt in the forthcoming generations and for millennia to come, his interaction has been critical to the sub-cultures within the contemporary music scene and movements of electronic and avant-garde music's, his artistic contribution is eternal, Sun Ra's music is truly a link between this world and the next.

Marshall will be turning 90 years old this year, and we offer our sincere appreciation to him for the better world he has created through his music. He'll be spending his 90th trip around the sun touring the planet, so don't miss the Arkestra out on the road in a city near you! For dates visit http://www.sunraarkestra.com/1-main.html.

We'll kick off the week by posting an article that Google returns zero results for until today, so enjoy this new entry in to cyberspace!


Thanks to Paul Griffiths [http://outerspaceways.info/forum/saturn/43599], we have just learned that 21 Sun Ra Arkestra albums have been remastered and released via iTunes with no announcement or fanfare. Many details are as yet unknown, but many of the releases (not all) contain bonus tracks, extended versions, and stereo versions for some songs previously only available as mono mixes.

Here's what we know as of now, thanks to Paul. The Nubians of Plutonia contains versions of Ankhanaton and Spontaneous Simplicity from acetates discovered by Robert L. Campbell on an acetate. Invisible Shield includes a 10 minute version of Island In the Sun. Monorails and Satellites Vol. 1 contains 6 unreleased solo piano pieces. Fate in a Pleasant Mood features a reverb drenched "single version" of Lights on a Satellite.

For the Sun Ra Arkestra's dedicated fans this is major news and the stuff dreams are made of. Stayed tuned for more details, and please share your feedback as you listen to these new releases!

As you might have noticed, when Part 2 was first posted he made tantalizing reference to an image that didn't actually appear with the article:

"Among early press appearances, one recently unearthed item is of particular interest: a photo of Sonny Blount that appeared in the Birmingham World in October of 1940. Republished here for the first time, it seems, in some 70 years, it’s a tantalizing photo for Sun Ra fans, offering a tiny window into the musician’s roots. The Ripple Rhythm Four, the caption reads, were “making a name for themselves in the radio world,” broadcasting Monday through Friday at 12:30 on station WSGN; immediately recognizable, the youthful Sonny Blount stands with the three other singers, two of them holding guitars, each dressed in matching white jackets and black pants."

Happily, I went back to check today, and the photo has magically appeared! Thank you very much for your work Burgin!