Curiosity about the band brought a number of students to the show.

Thirteen band members played a wide range of instruments, including saxophones, clarinets, flutes and hand drums. Some danced in place and walked around the stage during songs.

The band was conducted by Arkestra member Marshall Allen, who also composed a number of their songs.

The band's sound had swing and lounge influences but a keyboard and an electronic valve instrument brought a new-age style to their songs. They played a cover of Duke Ellington's "Black and Tan," but they also played original songs as well. Catchy jazz beats were prominent but the electronic valve was screeching at times.

One song was played as a tribute to former Arkestra member June Tyson.

The band played a wide range of songs, some upbeat and others more somber, but tempo changes kept up the energy.

The Arkestra also played a number of Halloween themed songs and encouraged audience participation. During one song the audience was told to make ghoul noises. During the second half of the show some of the band members also came off the stage and walked through the aisles of the recital hall.

"I thought the show was fun and quirky," said Christine Lutian, a 7th-semester French and German double major. "It was a good way to spend Halloween."

"One of my professors recommended [the concert]," said Tom Sulzicki, a 9th-semester music education major. "I've heard of [the band] but I haven't heard much of them."

The Sun Ra Arkestra was formed in the mid 1950s by Sun Ra. Ra claimed that he was from Saturn and his beliefs came through in his eclectic music style. After Ra's death, the band was then conducted by Allen.

The concert, sponsored by WHUS, was free to students and $25 to the public or $20 if they were wearing a Halloween costume. 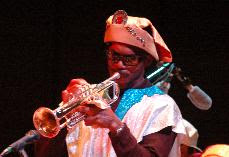