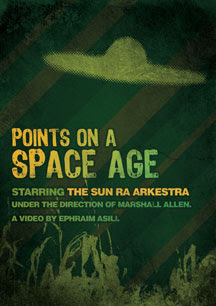 Offers rare insight of the Arkestra and examines their current work (in the physical absence of Sun Ra) under the direction of Marshall Allen (now age 86).

(MVD) MVD Visual and Ephraim Asili are pleased to announce the home viewing release of Points On A Space Age for worldwide distribution on DVD May 19th. Points On A Space Age, filmed between Spring'06 and Spring '07, explores the recent activity of the remaining members of the influential Sun Ra Arkestra.

The film examines the work the Arkestra in the physical absence of Sun Ra. After Sun Ra "left the planet" direction of the band was left to his most faithful musician and companion Marshall Allen (a member of the band since to mid 1950's). Since the passing of Ra, the band under the direction of Allen (now age 86) continues to maintain an active touring schedule and continues to recruit younger members into the Sun Ra lifestyle. A lifestyle committed to human development through the disciples of Music and Spirituality.

For director and producer Ephraim Asili, the fascination with the Arkestra began one day during the summer of '98 in Philadelphia: It was a warm, clear, and sunny summer day. The Arkestra was giving a free concert in a park near their collective home/rehearsal space. Then it happened... Clear skies turned grey and a thunderstorm broke out. The audience evaporated. In the midst of all of this I stood in the rain as band members began jumping off of the bandstand, instruments in hand. I thought to myself "That's it… Time to go". Just as I began to leave I realized that the band was not running from the rain, they were starting some sort of procession through the park. The members began weaving through the storm and remaining spectators while at the same time playing some of the most beautiful and bizarre music that I had ever heard…

Points On A Space Age uses an approach as experimental as the band and functions to give those who have already seen the Arkestra an opportunity to experience them yet again, and for those that have not seen them it offers some insight into one of the most influential bands of the 20th Century.

The Arkestra, is an experimental big band formed in the mid 1950's around the teachings of, musician, philosopher, and spiritualist Sun Ra. Sun Ra, according to himself and his disciples believed that he was sent to this planet to prepare human beings for the world for the future, a future centered around space travel, and the human capacity to evolve with ever changing demands of a highly technological world. The members of Ra's band were not only band mates they were also disciples, students, and companions to their Guru bandleader. All band members where required to learn the philosophy of Ra, and many members lived with him as well. It was common for the band to practice of eight hours, only breaking for teachings, and then go out and play gigs. The band continued in this manner for approximately thirty years until Sun Ra "left the planet" in 1993.