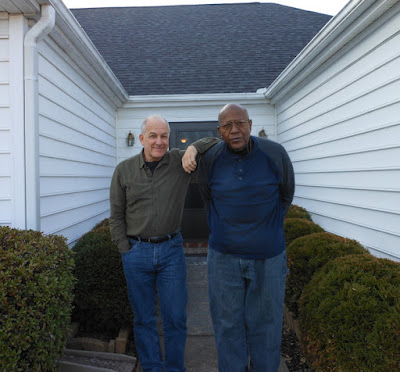 An excellent story by my friend Jim Knipfel about Sun Ra's posthumous legacy, posted at The Believer. The article discusses at length the work I've been doing since late 2013 administering and sorting out Ra's convoluted catalog and rights conflicts on behalf of Sun Ra LLC, the heirs of Herman Poole Blount. Pictured above: administrator and his "boss," Thomas Jenkins, Jr. (a.k.a. "Capt. T"), son of Ra's older sister Mary and patriarch of the family. Photo snapped Nov. 22, 2014, outside the Jenkins home in Powder Springs, Georgia.


"Thomas—a man I love and admire for his diligence, humor, and strength of character—explained to me the parade of unscrupulous characters who, after Ra's departure, emerged from the shadows to assert rights without lawful claims. Jenkins provided conclusive, documented proof of chain-of-title on Ra's rights for Sun Ra LLC, as well as a chronicle of dubious, and in some cases provably fraudulent, claims by those who felt entitled to a financial stake in Sunny's artistic legacy. And when I say financial stake, I should add, such as it was. Ra died impoverished, and owed the IRS—are you ready?—$146,799.95."

Chusid admits he had no idea what he was getting himself into when he agreed to step inside Sun Ra’s universe to try and sort a few things out.  “I did it to help Michael [D. Anderson], because he asked,” he says in retrospect. “I did not comprehend the scope of the task ahead and had no idea where it would lead. To be honest, I foresaw a tremendous expenditure of time and labor without any prospect of making it profitable. Just about every project I've developed—Raymond Scott, Esquivel, Jim Flora, Langley Schools, Shooby Taylor, outsider music—started as a labor of love, a challenge, something that intrigued me, and that was grounded on a unique artistic legacy that appealed to me. It was that way with Sun Ra. He's one of the great, unsung musical geniuses of the 20th century—easily dismissed as a crackpot or a charlatan by those who barely know his music. And if all you know is 'Space is the Place,' you don't know his music."