Those fortunate enough to have seen pianist-bandleader Sun Ra in concert never will forget it. Leading an army of instrumentalists, dancers, acrobats, fire-eaters and whatnot, Ra turned every performance into a multimedia spectacle.

"Space is the place" he'd cry, insisting he was thousands of years old and traveling on a journey through the galaxies.

For all his stage antics, however, Ra-who merged high craft with deep spirituality-influenced generations of musicians. Among them, Chicagoan Kelan Phil Cohran was an ideal choice to stage a Ra tribute, presented Thursday night to an audience of 7,500 at the Pritzker Pavilion in Millennium Park.

But this was no mere imitation of Ra, which would have been pointless. Instead, "Kelan Phil Cohran and the Legacy of Sun Ra" evoked the spirit of Ra's work-while focusing on the substance of Cohran's.

A revered Chicago musician, octogenarian Cohran has taught and enlightened uncounted jazz artists, drawing inspiration from his own years with Ra's Arkestra, in the late 1950s and early '60s. But if Ra's work was explosive and fantastically complex, Cohran's radiated a serene majesty throughout Thursday's concert.

Assisted by a vocal choir called the Rainbow Ensemble, flanked by a corps of instrumentalists dubbed the Spiritual Journey Percussion Ensemble and accompanied by the dynamic Hypnotic Brass Ensemble, Cohran presided over a music as rich in texture as Ra's but considerably less frenetic. If Ra's art thrived on furious rhythm and futuristic dissonance, Cohran's harked back to African antiquity.

You could hear it in the simplicity of the phrases the Rainbow Ensemble sang, its chanted choral passages punctuated by imploring solos, including an impassioned one from Maggie Brown.

The Hypnotic Brass Ensemble punched out aggressive motifs, nobly evoking the brass bands that flourished in the prehistory of jazz.

Cohran sat at the center of the stage-and the action-playing harp, French horn, drums and more, reflecting on Ra between numbers.

"When I was playing with him, we starved to death," Cohran told the crowd.

"He was ahead of his time--that was his only fault."

There's some consolation, though, in knowing Ra has had a worthy artistic heir in Cohran.

To Hypnotic Brass Ensemble: thank you thank you continue the legacy and have fun in Nigeria....(shake it in homage to Fela)

To all of our loved ones who crossed over in the past 6 months....thank you for smiling upon us and enabling us to cross the thershold between wolds..

South Side of the Sun (Time Out Magazine Article)
http://pressblog.uchicago.edu/ 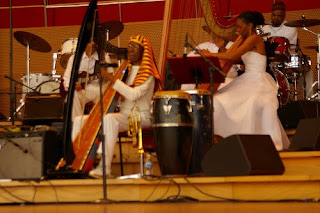 Please contact to get in touch with Bro Kelan Phil Cohran solcyrans317@gmail.com