ONE OF THE GODS by Bennett Theissen [Blog] 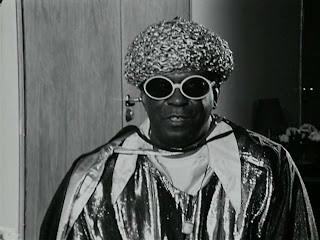 ONE OF THE GODS by Bennett Theissen

Last night I sat for two hours transfixed listening to the new Transparency release Sun Ra and his Intergalactic Solar Research Arkestra Helsinki 1971 -- The Complete Concert and Interview. When Michael had gotten the source tape he brought it over and we listened to it then, months ago, and I thought it was one of the coolest Sun Ra tapes I had ever heard. Listening to the final version last night, mastered gorgeously by Brian Albers, I was once again in awe of this strange man whose music has become so important to me over the decades.

Who was this being who walked the earth so long, but said he came from Saturn? I first listened to Sun Ra when he was on ESP in the late 60s and I was 15 and 16, and I have to admit I couldn't understand what I was getting into, but I found it compelling. I was drawn to the extremes of jazz, but I was also drawn to the purely sci-fi aspects of him too. In early 1969 I got both Kick Out the Jams by MC5 and I got Nothing Is... by Sun Ra. MC5 had turned Ra's composition "Starship" into a driving rock song, and both albums referenced the nothing is poem ("At first nothing is..."). The Ra music was extreme honking vomiting seering jazz, exploding from my speakers, but the album was intercut with these short bursts of pop song -- "this is the theme of the stargazers, stargazers in the sky" and "if you find earth boring, just the same old same thing, come on sign up for outer space race incorporated." (It wasn't until a couple years ago that I finally heard Ra's song about Apollo 11 -- "them folks been walkin' on the moon.")

Sadly, during most of the 70s I didn't keep up with Ra too much, life was too complicated (unlike today, when with a computer you can know everything). I did catch him playing in San Francisco in 1977 and in Chicago in 1980. While I was impressed as hell by the shows, and grateful to be there, it somehow didn't feel as vital as the music I had heard when I was ten years younger. Still, it was exciting and it was beyond terrific to see the beloved audience response. Sun Ra fans got it, and appreciated it deeply. But those $1.98 space costumes and the big band feel also seemed like a bit of camouflage, a cheesy coating to something that wanted to transcend time and place and confront us all with eternity. And stuck up pretentious artiste that I am, I didn't want the cover I wanted the eternity.

Which is why Michael Sheppard's Transparency releases of recent vintage have been so important. This Helsinki show I listened to last night, it made me think I had died and gone to some permanently cool hall of heaven, where maybe only Sun Ra and Bill Burroughs and a tiny handful of others hang out. One would hard pressed to call the Helsinki show "jazz" -- because even though it definitely resembles that style, it goes so far beyond it. The closest thing I can think of would be, maybe, Miles Davis' weird r&b and funk excursions of the early 70s. Maybe. Miles was trying to branch out, but Ra didn't feel any need to expand what he was doing because he was already there. He played a form of funk, but not like any other funk you've ever heard. There's a track here, from the first set (disc one), called Love in Outer Space, and it IS a funk track, with a funky bass over a mass of percussion, but it doesn't build up so much as OUTWARD. I can imagine trying to watch all twenty nine musicians as they go through this -- thing, I don't know how to talk about it. That builds for ten minutes, then becomes a cover of the song Watusi, then becomes the thematic heartbreaker of a piece called Enlightenment, best version EVER, which is followed by an impossible to describe Ra keyboard solo which ends the first set.

The difference between this and the shows I saw? Can't put my finger on it exactly, but I think the late 60s and early 70s shows are freer, and that when he became more popular (like when he was on Saturday Night Live) he felt he had to do his schtick more entertainingly, and that he played the Cosmic Fool. Not that he was a fool, or that he ever suffered fools, but he treated it like a role, and that's what I felt in 1977 and 1980. Not in this Helsinki show. Does that make sense to you?
If you haven't seen it, you need to check out the one Sun Ra movie, called Space Is The Place, which is sadly out of print right now. (Amazon has VHS tapes for $95 if you care.) I saw it projected on a hotel wall downtown L.A. last summer, and loved every cheap exploitative minute of it. I also need to read Ra's biography, also called Space is the Place, by John Szwed, but haven't yet. I'll get it soon, now that I'm writing this. I know a bit of Ra's history, where he learned some of his composing and arranging skills, etc. I know he was a definite outsider, in all senses. Even his sexuality is strange -- he was possibly gay but more probably asesxual, and sexuality never seemed to be one of his themes. He taught at Berkeley in 1971 -- Transparency has one of his class lectures on CD and it's extremely cool and very far out. He was generous and cared about his band, and they were devoted to him. In fact, the great Marshall Allen leads the Sun Ra Arkestra in concert even today. (There is a distant possibility that Transparency may try to set up a dual concert with the Arkestra and the Slits somewhere down the line!) I know that he left this mortal coil in 1993, but maybe he's still playing dates on the rings of Saturn and he just left here and went home.

I just wanted to tell you that you really need to track down this new release and devote some time to it. It won't let you down because it's real art. We all know the eternal mantra, "He got what he wanted but he lost what he had." With Ra it should be, "He had what he wanted and he got what he lost." Sun Ra is, in my mind, One of the Gods.

Thanks for reposting this. Also, check my radio show at http://chillroom.podomatic.com/. The show called "I'm Not A Human Being" is a Sun Ra special based on the very stuff I was writing about.