Honoring One Man in 2 Guises By NATE CHINEN [nytimes.com] 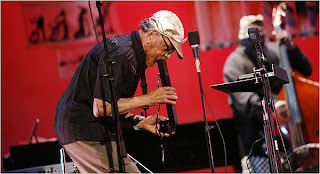 The alto saxophonist Marshall Allen assumed two guises, earthly and celestial, at the Abrons Arts Center on Wednesday night. Appearing as the guest of honor at the 14th annual Vision Festival, he took the stage first in civilian attire, playing freely and fiercely in an aggressive all-star quintet. Later he re-emerged in the spangly vestments of his office — a sequined robe, a priestly hat — to conduct the famously otherworldly Sun Ra Arkestra in a performance that was more strictly codified but a great deal looser-limbed.

Mr. Allen, who turned 85 last month, has been a member of the Arkestra for more than 50 years: he joined the ensemble almost at its origins, spearheading its reed section and faithfully minding the various edicts of its namesake leader. When he took the helm himself in the mid-1990s, after the deaths of Sun Ra and the tenor saxophonist John Gilmore, Mr. Allen set his sights on continuity. He has kept the band together and working, with one eye trained on the legacy of an expressly future-oriented music.

It’s no wonder the Vision organizers chose to give Mr. Allen a lifetime recognition award. The festival, an artist-run nonprofit organization, convenes each year to celebrate the precise set of values that has animated his career. Recent editions of the event similarly honored veteran jazz iconoclasts who had served, at one time, as guardians of a social order. Last year’s recipient was Kidd Jordan, a tenor saxophonist and educator from New Orleans.

Mr. Jordan, 74, played alongside Mr. Allen during Wednesday’s first set, and the contrast was illuminating. Mr. Jordan has an old-fashioned tone in the meaty midregister of his horn, and he trawls his altissimo range with imploring exactitude.

Mr. Allen is much more of a flamethrower: he used his alto as a delivery system for searing, convulsive blasts, running his right hand fast and clawlike across the instrument’s keys. He also coaxed loopy frequencies from an electronic valve instrument, making use of a pitch-modulator knob; its timbre suggested a steelier, less vocal-sounding theremin.

The quintet otherwise featured Vision stalwarts: the bassist William Parker, the drummer Hamid Drake and the bassist Henry Grimes, who doubled on violin. They hurled themselves into the effort, expertly advancing the fervent strain of free jazz that has been this festival’s house style.

Strikingly, that style was largely absent from the Arkestra’s set, which followed an uneventful stand by a group led by Bill Cole, a strident specialist on East Asian double-reed instruments. Mr. Allen focused instead on the rhythmic side of the band’s repertory, featuring songs buoyed by swing and calypso rhythm; often there were snappily cosmic lyrics sung by Art Jenkins or other members of the band. (A few tunes, including “Millennium,” a recent staple by Mr. Allen, occasioned a full-band singalong.)

The Arkestra isn’t the spit-and-polish machine it once was, but its young rhythm section performed admirably, and there were vital contributions from the trumpeter Fred Adams and the tenor saxophonist Charles Davis, among others. More to the point, what the group as a whole delivered was a sensation of boisterous delight. Mr. Allen, with his seemingly boundless energy, had a lot to do with that.

The Vision Festival continues on the Lower East Side through Sunday at the Abrons Arts Center, 466 Grand Street, at Pitt Street, and on Monday at the Angel Orensanz Foundation for the Arts, 172 Norfolk Street; visionfestival.org.
Posted by Christopher B. Eddy at 6/23/2009 10:46:00 AM