A Sideman In The Limelight: Marshall Allen by Lars Gotrich [npr.org] 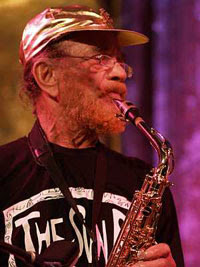 A Sideman In The Limelight: Marshall Allen
by Lars Gotrich

On Wednesday night, the 14th annual Vision Festival (one of the many New York jazz festivals still going on this summer) will honor saxophonist Marshall Allen with a Lifetime Achievement award.

Allen's an interesting case as he's not so much recognized for his own achievements, but the legacy he's carried on -- namely (and solely) that of Sun Ra. Allen traveled the outer spaceways for four decades leading the reed section of Sun Ra's Arkestra. In 1995, he took over its direction when tenor saxophonist John Gilmore passed away, who had picked up the reins when Sun Ra left planet Earth in 1993.

There's much to say for Allen's dedication. Sun Ra's vision was and is too big for this world. Just like the Mingus Big Band carries the torch for Charles Mingus, Allen ensures that the music of Sun Ra still breathes in concert venues, where that vision clearly thrives.

But Allen's individual contributions to free jazz both in and out of the Arkestra are worth note. His collaborations with percussionist Babatunde Olatunji mark some of the first free jazz/traditional African music fusions. And in various groups, he keeps a fire blowing with musicians like Kidd Jordan and fellow Philadelphian Elliott Levin.

Most of all, his pyrotechnic playing style is one that's been emulated times over. Allen told Tam Fiofori in a 1971 interview (later re-purposed for the essential book, As Serious As Your Life) that he "wanted to play on a broader sound basis rather than on chords." Watching and hearing this technique is like lightning and thunder: You see his fingers fly up and down his instrument, but only seem to catch the sound seconds later. For evidence, watch the clip from A Joyful Noise below, which the YouTube uploader correctly identifies as "Marshall Allen from Sun Ra goin' nuts."
Posted by Christopher B. Eddy at 6/11/2009 08:37:00 AM