An Interview with Sun Ra by Francis Davis, 1990

Slought Foundation, a non-profit organization rethinking contemporary art, presents "Sun Ra Meets Napoleon," an exhibition from November 20, 2004-January 31, 2005. This previously unreleased full recording (from 1990) of Sun Ra in conversation with Jazz critic Francis Davis has been made available in conjunction with the exhibition as well as online.

On Monday, January 29, 1990, jazz critic Francis Davis interviewed Sun Ra at the Sun Ra house on Morton Street in the Germantown section of Philadelphia. Davis recalls that while several resident Arkestra members were present, the mailman arrived at the door at almost the exact moment that he did, handed him the mail without knowing who he was, and said "good luck." One item in the mail that day was an Ed McMahon millionaire sweepstakes letter, addressed to Arkestra saxophonist John Gilmore. "JOHN GILMORE MAY ALREADY BE A WINNER," it read, and the Arkestra made quite a deal about that--as if it were an omen of some sort. Subsequent to Davis' visit, Sun Ra performed at the Philadelphia's African American Museum, and City Council honored him with a miniature Liberty Bell generally given to visiting celebrities and dignataries.

Sun Ra, among the most unusual composers in the history of jazz, was born Herman "Sonny" Blount in Birmingham, Alabama in 1914. Though he began recording in the late '40s, Ra's career didn't take off until the early '50s, when Blount adopted his now-famous moniker ("Le Sony'ra") and began claiming he came from Saturn. Infatuated with ancient Egypt, outer space and New Age mysticism, Ra formed a Chicago-based group called the Arkestra, which played an intriguing mix of bop, free jazz, and proto-electronic music. In 1956 he founded his own label, Saturn Records, and five years later relocated to New York, where he established himself as one of the more eccentric performers, releasing bizarre recordings which foreshadowed jazz fusion and ambient music by blending traditional jazz instruments with electric keyboard and unconventional song structures. In 1970 Sun Ra moved to Philadelphia, where he continued recording and performing for a small but loyal jazz and rock audience until his death in May 1993. In recent years an orchestrated effort by music historians to catalogue Ra's sidemen and recording sessions has been undertaken, resulting in the release of the discography The Earthly Recordings Of Sun Ra. The Sun Ra Arkestra continues to tour and record under the directon of the Arkestra's longtime alto player, Marshall Allen.

Philadelphian Francis Davis is the author of several books, including The History of the Blues, Bebop and Nothingness, a forthcoming biography of John Coltrane, and, most recently, Jazz and Its Discontents: A Francis Davis Reader (Da Capo Press, 2004). Davis is a contributing editor of The Atlantic Monthly, and also writes regularly about music for the New York Times and the Village Voice. He received a 1994 PEW grant for literature and a 1993 John Simon Guggenheim Memorial Foundation Fellowship. 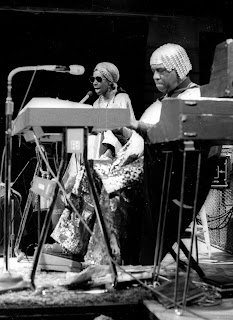