In Okayplayer's Spring/Summer line for 2008 we have one very special shirt. Entitled "Space Is The Place," named after a famous Sun Ra song and Sun Ra feature film, this shirt is intended to raise money for the Sun Ra Arkestra who are in a time of need. Why did we decide to make this shirt to help the Sun Ra Arkestra? Before you can understand the "why" let us explain the "who."

Who was Sun Ra? What is The Sun Ra Arkestra?

Born Herman Poole Blount in Birmingham, Alabama on May 22, 1914, he was nicknamed Sonny from his youth. He later abandoned his birth name and took on the name and persona of Sun Ra ("Ra" being the name of the ancient Egyptian god of the Sun). He did not consider himself "born"; rather, he "arrived" on the planet, entering via Birmingham. From the 50's to the 90's Sun Ra led a large ensemble with a fluid lineup under a variety of names: The Solar Myth Arkestra, The Intergalactic Space Research Arkestra, and many others. Sun Ra departed on Memorial Day of May 30, 1993.

Sun Ra's prolific achievements on Planet Earth have been widely acclaimed and recorded in documentaries, books, and a feature film titled "Space is The Place." A child prodigy, he was immersed in the rich musical culture of early 20th century Birmingham. As a student, he toured with various ensembles throughout the south before eventually landing in Chicago, where he worked in dancehalls and secured an engagement arranging for floorshows at the famed Club DeLisa. It was here that he formed a strong bond with Fletcher Henderson, one of the kings of Swing, arranging and playing piano in the late 1940s. In Henderson's orchestra he also worked with Coleman Hawkins. Gradually developing his own small groups, he founded his record label, El Saturn Records, in the 1950s, and proceeded to unleash nearly 200 fiercely individualistic and extremely diverse albums on an unsuspecting and largely unprepared public. He also recorded for a handful of major labels, and attained widespread notoriety from his legendary concerts, radio, and television appearances. His interstellar musical, poetic, linguistic, and spiritual explorations are unparalleled in modern civilization.

Claiming that he was of the "Angel Race" and not from Earth - more likely from Saturn - Sun Ra developed complex cosmic philosophies voiced in lyrical poetry. He was a fierce advocate of humanity's higher aspects, continually expressing his disgust with war, hatred, and ignorance. He and his band enacted elaborate "cosmo-dramas" in which Sun Ra, as ambassador, channeled the voice of The Creator of the Omniverse.

Sun Ra's vision of a sustainable cosmo-immortality exposes the wisdom and beauty of our fragile existence. Over the course of four decades, Sun Ra's success in expressing his enormous musical gift epitomizes a flourishing of the spirit from which we can all draw inspiration.

With The Arkestra, Sun Ra gave astonishing performances around the world for decades. He was always accompanied by stellar musicians in fantastic costumes, and a joyful atmosphere of mischievous space camaraderie was ever present. His music is most often regarded as 'Jazz,' though it spans the full spectrum from Swing to Space, with ballads, show tunes, hard- and post-bop, exoticism, funk, energy music, and electronic hyperdrive.

In 2008 - 15 years following the departure of the master - Marshall Allen is going stonger than ever, directing the Sun Ra Arkestra with a brightly lit torch. A handful of current Arkestra members joined the group since the 1950's. The group today is among the last living links to the big band tradition, catapulting from yesteryear into tomorrow, beyond the 22nd century - as Sun Ra always did.

Sun Ra's mission, much like Stevie Wonder, was always about uniting the people (earthlings and spacemen alike) through powerful music. Okayplayer, The Roots, and all of the musicians we support share this goal, and we thank Sun Ra for everything he did to open the doors for future artists. 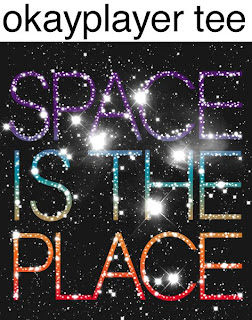