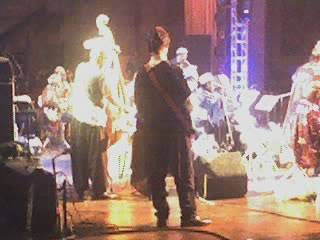 MY NIGHT AS A TONE SCIENTIST

In the half-between world,
Dwell they: The Tone Scientists
In notes and tone
They speak of many things…
The tone scientists:
Architects of planes of discipline
Mathematically precise are they:
The tone-scientists
(Sun Ra)

Brazilian percussionist Elson Nascimento called last week and invited me to sit in with The Sun Ra Arkestra under the direction of Marshall Allen. They were Saturday night’s ArthurFest headliners, a four-day music festival held here in Los Angeles and curated by Arthur Magazine.

Was I thrilled? That’s putting it mildly. I have had a long-time admiration for the work of Sun Ra and his merry band of intergalactic explorers. Still do today.

I was first exposed to them in the 1960s with their ESP Disc, The Heliocentric Worlds of Sun Ra and others. Those records - and the fact that John Sinclair booked us on a concert co-headlining with them at the Community Arts Auditorium at Wayne State University in Detroit - changed the way I would think about music for the rest of my life.

We continued to perform on concerts with The Arkestra over the next few years and I came to spend some time with Sun Ra himself. His ideas about Art, Music and culture helped form my own. In the Modern Age, with the resurgence of interest in the MC5, we have been able to reconnect with The Arkestra for concerts in London, New York and Los Angeles.

Although Sun Ra and some of the other founding members have gone on to Saturn, the band continues to travel the space ways under the able leadership of alto genius Marshall Allen. Many of the players on the band have long-time membership and the spirit remains completely intact.

So when I got the call, it was as if I was at once being asked to enter into a fifth dimension of my own past and future.

When I arrived at the gig, I took some good-natured kidding from the musicians about the traditional black suit and tie I was wearing. (I had just come directly from a TV studio where my current project, The Lexington Artists Workshop Ensemble, had performed a couple of numbers for the Hep C Awareness Telethon.)

I was informed that, in order to perform with The Arkestra, I would need to be outfitted with the appropriate space uniform. No problem. I put on the dark blue sequined robe and matching headwear with joy.

When I asked Marshall what numbers I should play on he said, “Play it all. Just be ready, because there is no way to know what might happen.” This has been my personal attitude for years and here it was being conferred on me by one of the masters. Was I ready? Yes, brother! I have been waiting for this night all my life.

I was talking in the dressing room with trumpeter Fred Adams about the music Sun Ra composed and left to them. He told me they have just scratched the surface on the mother load of unrecorded material. Marshall talked with me about the dilemma of having so much music and so little time to perform it.

I’m not someone who goes for the ritual of a group hug or prayer before a performance, but when I was told to “join-up” right before time to play I was honored to be included. This wasn’t a religious rite, but an invocation to recognize together who we were and what we were doing right then and there. That we were about to “create music for a better world. On this planet and all other planets!” And that we were all, “Sun Ra”.

I took the stage with the players and never felt more proud to be an artist punching in on the job.

The music was expansive. We played inside and outside the forms. Some tunes I could grasp the basic 16-bar II-V-I structure and others were way too difficult to attempt. I was standing next to bassist Juini Booth and could read some changes from his charts but often they came just too fast and furious for me. Other tunes were deep, deep space grooves that I locked into and worked as relentlessly as I could.

This kind of playing takes a great deal of concentration and my sore wrists reminded me of it later. Marshall was so gracious in granting me a few solo passages. For me, this was Heaven. Of course there were interludes of music that some might call “free music,” although this is a misnomer. When and how you play in this context is anything but free. This is about discipline, not freedom, which was one of the principles at the core of Sun Ra’s philosophy.

Marshall was a consummate bandleader in directing us through these sections. He was very clear and confident about what he wanted and when he wanted it. The Arkestra played, danced and sang and the audience enjoyed every minute of it.

Arkestra guitarist, David Hotep is a master chordist and I was trying to keep up, but it was like trying to catch a comet.

Dave Davis on trombone showed his great enthusiasm for music throughout the set, along with baritone saxophonist Rey Scott. As usual, drummer Luquman Ali drove the band with cosmic precision. The final notes played were a joyful exchange between Marshall Allen and tenor saxophonist Yahya Abdul-Majid.

Before I realized it, we had played for an hour and 30 minutes and it was time to go. We had traveled the space ways from planet to planet and returned to earth, all the better for it.
Sometimes it just doesn’t get any better.