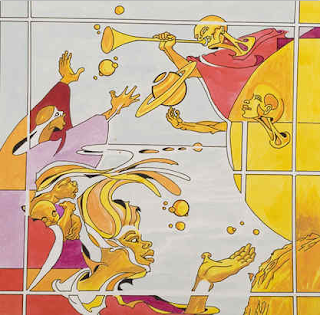 Art: Lending art to Darwin's science It adds an almost-plausible if fictional dimension to the great man's observations.

Posted on Sun, May 10, 2009 By Edward Sozanski Contributing Art Critic

One hundred and fifty years ago, Charles Darwin propounded one of the most momentous ideas in human history - that living species evolve over time through natural selection. Despite mountains of subsequent evidence affirming his profound insight, many people still reject what today seems self-evident to many others.
What more appropriate way, then, to celebrate the 200th anniversary of the great man's birth and the sesquicentennial of the publication of On the Origin of Species than to organize a "dialogue" with Darwin that exposes laypeople to priceless historical material and encourages them to consider and respond to it.

The American Philosophical Society has done exactly that. Historical documents in "Dialogues With Darwin" enable visitors to follow the heated scientific debate instigated by the publication of his landmark book. But it also includes an unexpected, provocative and delightful dialogue - with art.

What connected Charles Darwin to art? Nothing at all, aside from his relationship, through his mother and wife, to pottery entrepreneur Josiah Wedgwood. Yet the art that Eve Andrée Laramée has contributed to this archival display adds an almost-plausible, but fictional, aesthetic dimension to Darwin's empirical observations.

Laramée, who has exhibited widely through the United States and Europe, including at the Venice Biennale, says she is "interested in the ways that art and science are used to create belief systems about the natural world."

"I try to draw attention to areas of overlap and interconnection between artistic exploration and scientific investigation, and to the slippery human subjectivity underlying both processes."

Laramée's projects subtly challenge the authority of science to provide ironclad explanations of how nature works. Her contribution to "Dialogues" does something else - it also challenges one's ability to distinguish solid science from imagination or artistic invention.

To engage her work, which mostly takes the form of sculpture, one must accept that science and art can sometimes overlap. This is easily achieved; just think back to early maps of the Earth, full of implausible guesses and even sea monsters. It took centuries for the rational science developed in the ancient world to fully shake off corrupting myths and wishful thinking.

Laramée's segment of the show, called "Luminous Darwin," is arguably the most engaging dialogue of all, perhaps because, while it's entirely fictional, it's so deftly composed as to be almost plausible. Anyone totally ignorant of basic science could be bamboozled.

At the corners of a stellar display of illustrated books, maps and manuscripts, including original pages from Origin, she has installed a parallel narrative.

It proceeds from three "lost Darwin notebooks" created by her to look authentically antique, even down to the handwriting. In them, the eminent scientist supposedly reflects on the dreams of plants, the memories of stones, and the awareness of (animal) cells.

To give these musings concrete form, Laramée has constructed a suite of faux-scientific instruments, all but one fabricated in glistening copper, that mimic the appearance of Victorian laboratory apparatus. Three of these are "magic lanterns" with huge lenses that serve as viewing portholes to videos inside. One resembles a primitive typewriter or calculator.

The most piquant of her machines is Device to Extract Memories From Stones, a bit of fossil ammonite pinioned within a ring of copper knife points. Delicate copper wiring implies that these devices are electrical.

Laramée's imposture is thoroughly persuasive, at least as it applies to Darwin's time, when creative hoaxes such as Piltdown Man were initially accepted as science. It is less so for today, when science is more technologically precise and intellectually rigorous.

Still, her involvement adds zest to "Dialogues" by forcing visitors to think more critically about what they're willing to accept as verifiable truth.

Sun Ra Thinks Visually. Sun Ra (birth name Herman Poole Blount) is remembered as an influential jazz musician, bandleader, and self-proclaimed mystic and philosopher, especially in Philadelphia, where the Birmingham native lived from 1968 to his death in 1993.

Sun Ra, who claimed to come from Saturn and named himself after the Egyptian sun god, built up a mythology around himself and his Arkestra (his intentional spelling) that was grounded in a cultural movement called Afro-Futurism. Though primarily a musician, he also expressed himself visually and through poetry and philosophical writings.

It's mainly the visual part of his career that's featured in "Pathways to Unknown Worlds" at the Institute of Contemporary Art. Developed at the Hyde Park Art Center in Chicago, where Ra spent his formative years as an artist from the mid-1950s to the late 1960s, the show samples, but never adequately explains, his multifaceted personality and career.

It consists of a selection of small paintings, prints, drawings, manuscripts, videos and ephemera, and - most important - recordings of his music that provide the most satisfying justification for visiting the exhibition.

Jazz music is what Sun Ra did best and most innovatively; this is one art-museum show in which listening is far more rewarding than looking.

That's because "Pathways to Unknown Worlds" is primarily a cultural stew designed to illuminate a distinctive African American personality and a worldview tied to African roots. The visual material is mainly designs for record-album covers, and sometimes the actual sleeves.

The covers are offered as examples of how Sun Ra and his associates controlled all aspects of their music through an independent label called El Saturns Records, down to designing and sometimes even fabricating their own albums.

That fact is usually more interesting than the individual designs themselves, many of which look like student graphic-design projects. They do not inspire one to linger; except for the 1972 cover design for Discipline by LeRoy Butler, Sun Ra would have served himself better by hiring out this work.

His visual efforts are far outstripped by his progressive-style jazz - dissonant and strongly rhythmic, dominated by sax, piano (Ra's instrument), and percussion.

The bits I heard were instantly captivating. Spend your time on the "listening bench," where you can sample 19 songs. If you're not overwhelmed by the graphic work, which is more interesting as archive than as art, the bench will make you a fan.

"Pathways to Unknown Worlds" continues at the Institute of Contemporary Art, 36th and Sansom Streets, through Aug. 2. Hours are noon to 8 p.m. Wednesdays through Fridays and 11 a.m. to 5 p.m. Saturdays and Sundays. Free admission. Information: 215-898-7108 or www.icaphila.org.