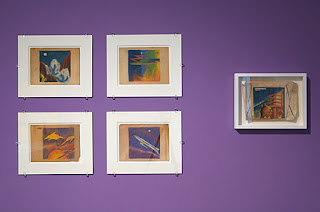 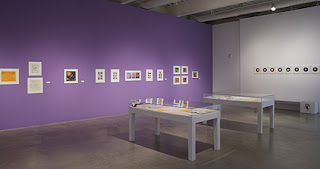 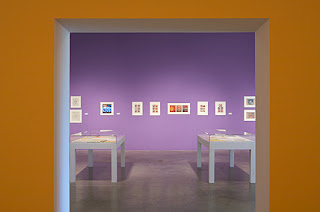 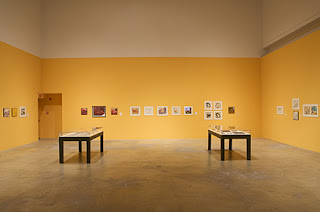 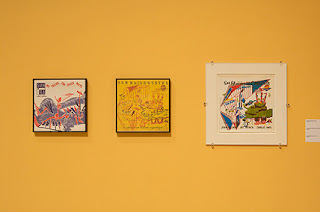 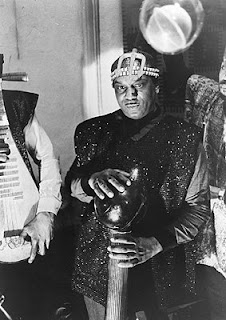 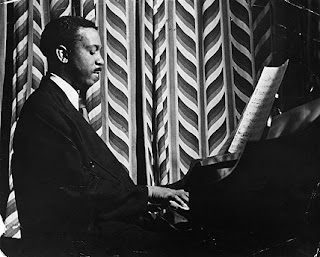 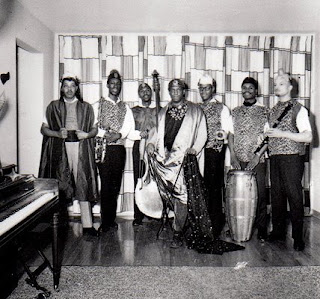 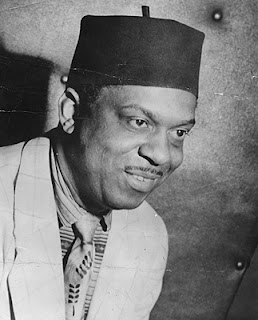 Jazz pioneer, bandleader, mystic, philosopher, and consummate Afro-Futurist, Sun Ra, (born Herman Poole Blount 1914, Birmingham, Alabama, died 1993) and his personal mythology have grown increasingly relevant to a broad range of artists and communities. "Pathways to Unknown Worlds: Sun Ra, El Saturn & Chicago's Afro-Futurist Underground, 1954-1968" presents a collection of paintings, drawings, prints, manuscripts, ephemera, and video produced by and about Ra and his associates—much of it previously unseen. This exhibition examines how Ra and his dynamic, continually-evolving ensemble, the Philadelphia-based Arkestra, crafted both their otherworldly image and fiercely independent approach to self-production.

Highlights of the exhibition include original drawings for their 1960's albums Art Forms of Dimensions Tomorrow and Other Planes of There, and five newly discovered typed and annotated broadsheets. Until recently, only one such broadsheet was known to exist—the one that Ra gave saxophonist John Coltrane in 1956. The show will also include the unpublished manuscript, The Magic Lie, a book of Ra's poetry, which has become influential in the nascent Black Islamic movement. In addition to these documents, the film Spaceways, by Edward English, will be on view. The film documents Ra and his Arkestra (a deliberate re-spelling of "orchestra"), in 1968, as they prepare to perform at Carnegie Hall.

Early in his career, Sun Ra spent virtually all of his time and energy on Chicago's south side, identifying with broader struggles for black power and identity, and saw his music as a key element in that struggle. As well as Sun Ra's connection to the incipient grass-roots Afro-Futurist movement in Chicago, he also has a connection to Philadelphia. In 1968, Sun Ra brought the Arkestra to Philadelphia, where his band mate Marshall Allen inherited a house on Morton Street in Germantown. The house served as band headquarters until Sun Ra's death in 1993. The Arkestra continues to perform under the leadership of Marshall Allen, who still resides at the Germantown house.

Long admired among fans of progressive jazz, Ra and his personal mythology have grown increasingly relevant and influential to a broad range of artists and communities. His music touched on the entire history of jazz, but he was also a pioneer of electronic and space music, and free improvisation.

Sun Ra developed a complicated persona of cosmic philosophies and lyrical poetry that made him a pioneer of Afro-futurism (a term coined by cultural critic Mark Dery in his 1994 essay "Black to the Future.")

"Pathways to Unknown Worlds" is curated by John Corbett, Anthony Elms and Terri Kapsalis for the Hyde Park Art Center, Chicago and is coordinated at the ICA by Whitney Lauder Curatorial Fellow Stamatina Gregory. This exhibition is accompanied by a catalogue, $25. Institute of Contemporary Art | University of Pennsylvania 118 S. 36th St. Philadelphia, PA 19104-3289 T 215.898.7108 | F 215.898.5050 | contact us

Thanks for posting all these photos--I actually made it to the exhibit, and it's a blast. The highlight for me was the area where they were playing a continuous loop of unreleased recordings. There was some amazing stuff there, and even though I didn't have the time to sit there and hear all of them, I did manage to jot down most of the pieces as listed on the wall. Hopefully John Corbett will release this stuff on Atavistic.

Sure thing! It's not complete...