Sun Ra Arkestra: "Hymn to the Universe" Concert On Demand 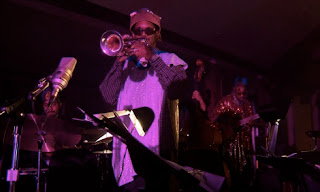 The Sun Ra Arkestre was formed by Sun Ra in the 1950's and has been performing ever since. Following Sun Ra's death in 1993 Marshall Allen - who had ben leading the reed section for 40 years - took over the ensemble.

The Arkestre's jazz is avant garde, eclectic and playful and performed by a band full of extremely talented and dedicated musicians whose music is their life.

"Hymn to the Universe" is a celebration of music and dance with the combined forces of the Sun Ra Arkestre under the direction of Marshall Allen and the dance company Coleman Lemieux & Compagnie.

The Music Gallery and Rough Idea presented "Hymn to the Universe" at the Palais Royale during the 2008 X Avant New Music Festival.

Music composed by Sun Ra except where otherwise indicated:

Body and Soul by Johnny Green
The Conjunction of Science and Religion by Marshall Allen 3:47
3-Section Three: Attunement