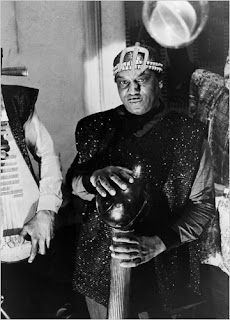 PHILADELPHIA — The jazz musician Sun Ra, ambassador from the Airy Kingdom World Tomorrow, creator of Enterplanetary Solar Exploding Music, and founder of the Astro Intergalactic Infinity Arkestra, is a hero of mine.

To my ears he was not only a genius composer, keyboardist and bandleader, but also constantly surprising. One minute he’s playing elevator schmaltz; then he’s making you float on air; then he’s making you deaf. I love that he was a sharp dresser, sort of kingly, sort of queenly, in faux leopard-skin capes and miner’s hats with lights.

I also admire him for transcending existential categories. He insisted he hadn’t been born, but always existed, coming to Earth from outer space, specifically the planet Saturn. Like many immigrants, he was self-invented, but radically so. He rejected being black or white or American or even human. He opted for extraterrestrial and wore his otherness like a crown.

You’ll find evidence for all of this in “Pathways to Unknown Worlds: Sun Ra, El Saturn & Chicago’s Afro-Futurist Underground, 1954-68,” a small, piquant exhibition of art, writing and ephemera related to his life at the Institute of Contemporary Art here.

Although he kept the precise facts of his early life under wraps, documents show that he was beamed down to Birmingham, Ala., in 1914 as Herman Poole Blount, affectionately known as Sonny. In 1952 he changed his name to Le Sony’r Ra, Ra being the ancient Egyptian solar god. And as a performer he became Sun Ra.

He had at least as many talents as monikers. In addition to being a musician, he was a poet, philosopher, painter, graphic designer, street lecturer, activist and entrepreneur, as well as a numerologist and mystic. He worked out the fate of the universe through interpretive readings of the Bible, the Koran and Flash Gordon comic books, concluding that “the only way this world can be saved from being completely destroyed is through music.”

With that in mind, he composed and played without cease for 60 years, first in Birmingham, then in Chicago and New York, and finally in Philadelphia, where he lived until just before his death in 1993.

He also recorded, packaged and tried to sell his music, which, because it was unconventional, wasn’t easy to do. It is the practical side of his career that this exhibition of album jacket designs, posters, news releases and socio-spiritual manifestos, most of them from his formative years in Chicago, focuses on.

Organized self-promotion was not one of his skills. He was too reserved and too much an outsider. Shy and studious as a youth, he got by on his prodigious keyboard talent. But a visionary experience he claimed to have had gives an idea of his sense of apartness.

“My whole body changed into something else,” he reported many years after. “I could see through myself, I wasn’t in human form.” He said he was taken on an intergalactic trip by creatures with “one little antenna on each ear,” who told him to leave school because “the world was going into complete chaos.”

It’s always a little hard to tell if Sun Ra was being serious or not, but a sense of alienation seemed to be part of his makeup. In Chicago, where he went to find work after World War II, he met the ideal business partner in Alton Abraham, a teenager with spiritual interests similar to his own — both were members of an occult, utopian black separatist secret society — but with the organizational and promotional abilities he lacked.

Partly because both men were proponents of black self-sufficiency, do-it-yourself was their business style. This meant they could entirely monitor their product. Gradually they shaped the image of the musician who would become Sun Ra, and of the band he would lead, first called 8 Rays of Jazz, then the Arkestra. (The respelling may be based on the way “orchestra” was pronounced in Alabama; it also incorporates the name Ra written forward and backward.)

It was at this point, in the early 1950s, that a Sun Ra “look” for the band started to come into focus: a mystical-historical-comical blend of science fiction, Egyptology, Southern mummery, Freemasonry, nightclub theatrics (costumed acts were big at the time) and African masquerade, with rakishly flipped-brim Robin Hood caps — later beanies with propellers — thrown in.

To maintain complete control over the increasingly experimental music, Sun Ra and Mr. Abraham created their own label. They called it El Saturn Records and, using local black-owned businesses as a resource, they oversaw every aspect of album production, from recording, to pressing disks, to packaging and sales.

They paid close attention to the appearance of the product, ensuring that it looked handmade and offbeat. Sun Ra created some of the early record jackets himself. His specialty was fancy lettering with abstract flourishes, as seen in the colored pencil drawing of his name, as large as a Turkish emperor’s tugra, on the cover of “Art Forms of Dimensions Tomorrow.”

A few other artists — LeRoy Butler, James Bryant and one who signed himself Aye — later contributed more graphically dynamic images. But most of the designs were by Claude Dangerfield, a self-taught painter and a high school friend of several Arkestra musicians.

He was responsible for the art on many of the albums made in Chicago and later in New York — “Super-Sonic Jazz,” “We Travel the Spaceways,” “Sun Ra and his Solar Arkestra Visits Planet Earth.” And it was his work that most consistently embodied the Arkestra’s signature space-age theme.

The theme had wide currency in cold war America, from doomsday Hollywood films to pop songs like “The Purple People Eater.” But the fantasy of traveling into outer-space blackness to find other, friendlier future worlds, had a specific pertinence to black nationalist thinking at the time. (When Sun Ra said, “Space is the place,” certain people knew where that place was.) In the 1990s this trend was retrospectively given the name Afro-Futurism, and Mr. Dangerfield’s art, like Sun Ra’s persona, embodies it.

There’s quite a bit of Mr. Dangerfield in the exhibition, which was originally organized by John Corbett, Anthony Elms and Terri Kapsalis for the Hyde Park Art Center in Chicago. The work encompasses not only his original jacket designs, but also hand-painted color separations and some of the plates used for the first printings. Seen in the light of the digital present, they are time-worn artifacts, but together they give a vivid sense of the grass-roots, cottage-industry enterprise that El Saturn Records was.

Sun Ra was pretty grass roots too. In the Chicago years he was still a local phenomenon, performing mostly in black clubs on the South Side. Even when he moved to New York City in 1965, his audience didn’t change much at first. His mercurial shifts, from bebop to improvisation to Disney film tunes, with Latino and African riffs folded in, left earthlings confused. And when the Arkestra stood on a stage and instrumentally screamed at listeners, people headed for the door.

Nor was Sun Ra himself always easy to take. Although a certain adorableness eventually accrued to him, he could be heroically furious in the pre-Black Power Chicago years, and speak with a prophet’s wrathful, rebuking voice. It comes through loud and clear in five typed broadsheets on view in the show.

He used them as scripts for street lectures, and in them highly conflicted racial polemics take the form of slicing, aggressive wordplay that spares no one’s feelings, white or black. He was speaking from one step beyond all that. “I never wanted to be part of planet Earth,” he once said, “And I did everything not to be part of it.” This was true.

The one thing he did that kept him here was make transcendent music. You get a taste of it in a short 1968 film by Edward English called “Spaceways,” which plays in one of the galleries. The film fleetingly places Sun Ra in the context of the civil rights and Black Power movements, which is right. But the best, most moving part is a long sequence in which the Arkestra is heard rehearsing for a Carnegie Hall concert.

The band — based in Philadelphia and still active today — is large here, maybe two dozen men; the percussion section is huge. Basically what we hear is a grand chorale of drums, chimes, bells and everything else. The Arkestra has become a celestial biofeedback machine, a thundering angel band, and Sun Ra, crowned, robed and serene on keyboard, is at its center, as majestic as an aging Rembrandt.

As the rhythms build, level out and build again, you feel they could go on forever. And you wish they would until, like a space ship, mountain-huge and transparent as air, they lift off.