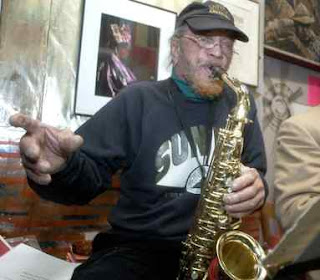 Sun Ra's cosmic philosophy and joyful noise long have been influential to all alternative music. But since 2000, the work of the late avant-garde jazz swing composer/keyboardist - often ignored by the mainstream - has experienced a renaissance.

Celebrating the Germantown transplant, who died in 1993 at age 79, has become a preoccupation of labels like Atavistic and Evidence, which are bringing out previously unreleased recordings from Ra's own Saturn imprint. While Ra and his merry men, the Arkestra, played themselves in the 1974 film Space Is the Place, recent documentaries like Brother From Another Planet and local director Ephraim Asili's new Points on a Space Age flourish. Philly's ICA even has a Sun Ra Arkestra exhibit running until August.

Yet for all this acclaim, little has been allocated to Ra's eventual successor and Arkestra leader, saxophonist Marshall Allen.

Toasts were given. Birthday songs were sung. MoonPies were eaten. And during intermission, attendees watched videos - all to celebrate Allen, the man who, since 1995, has led the 15-member ensemble in Ra's image and with his own magnetic arranging and compositions skills.

On stage, Ra's visual image was, as always, portrayed with gilded robes, floppy hats and wide-eyed stares. His sonic image (and that of Allen's, who has been an Arkestra member since the 1950s) was displayed in the band's usual flurry of hyperactive African percussion, woozy reeds and brass, oddball time signatures, chanted vocals and a preoccupation with big band brio, from a down-and-dirty New Orleans to Duke Ellington's Harlem fantasia.

Each tune - from the Disney dearness of "When You Wish Upon a Star" to the psychedelic organ-grinding of "Sometimes I'm Happy" - ended like a drunken shipwreck. While "Angels and Demons at Play" toyed with an Egyptian blues motif and a clunky spastic rhythm, "In-B-Tween" sounded like elephants braying atop a prickly percolating samba.

Though occasionally silly, Allen's Ra-Arkestra was no joke. Longtime Ra trumpeter Michael Ray and alto saxophonist Knoel Scott were as staunchly masterful as they were madly adventurous, riding the precipice of tradition with each lick.

And Allen? He squeaked his way through the rhythm-and-chant of "Millennium" without losing its melodic nuance and improvised on his whistle-sounding synth-sax like Coltrane meeting Ra on the offshoots of Jupiter.