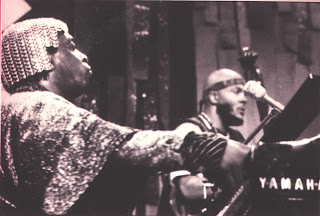 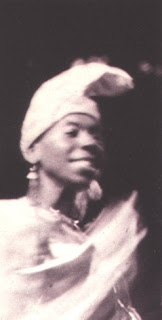 I love this story from Ahmed Abdullah's web site...

One really bizarre financial debacle happened at the Montreux Jazz Festival in July, 1976. Montreux, Switzerland, is one of a couple of dreamlike places I have been to. The Swiss Alps surround this rich smelling, immaculate town. The hotel we stayed at was fabulous. I had a huge room with a bathroom large enough to have been mistaken for a bedroom. I even used the tub as if it were a bed, especially after that long trip from Paris. Laying in the tub, I could open the window and stare out at a most breathtaking scene of snow capped mountains. It was better than National Geographic. However lovely, this was not a vacation. It was work.

When it was time to hit, the band had over 20 members on stage, all recorded with one overhead microphone. Sun Ra was in rare form, even for him; consequently, the band was turned on and played beyond itself. John Gilmore, Pat Patrick, Marshall Allen (the big three) turned in amazing work. The two Dannys, Thompson and Davis, as well as Jack Jacson and Eloe Omoe completed the sax section. Sun Ra had also brought along a fellow named Reginald Hudgins, a soprano sax player from Philly. There were three dancers, Wisteria aka Judith Holton, Cheryl Banks, and Raymond Sawyer, someone else new to me who was every bit as great as Bob Johnson. June Tyson was present with her voice from another planet. My former trumpet teacher, Chris Capers, Al Evans and myself were one part of the brass section that was completed by trombonist Craig Harris (just out of college) and Vincent Chancey, both relatively new to the band. Ahk Tal Ebah had been left in Philly, so even though both Al and Chris had played in the band before, they hadn’t played with Ebah, who basically knew the arrangements. So, in a sense, things had rapidly fallen on my shoulders. I was kind of amazed at how quickly everything was moving. I had joined the band a little over a year before, and now I was leading a section in one of the prized Jazz festivals of Europe.

Richard Wilkenson, June’s mate, was our road manager. After the concert was over, everyone was flying high from the music. Richard had given me a padded shoulder bag to hold. I hardly noticed when he did it and certainly did not know its contents. I stopped somewhere on the festival grounds to hear another performing group and placed the bag under my chair. There were several stages at Montreux, and in each arena there was another group performing. At some point the people in the band were notified that the Arkestra’s bus was taking off. I quickly left to join the group and boarded and proceeded out of the dream town in high spirits befitting a band of conquering heroes.

Half a mile out of town I heard Sun Ra ask, “Richard, where’s my bag?”

Richard was sitting in the middle of the bus. I was near the back of the bus. Richard called out, “Ahmed, where’s the bag I gave you?”

In the post-gig excitement I had all but forgotten it. The bag had all the money from the gig, one of the best paying festivals in Europe, and I had left it under my seat inside the Montreux festival grounds. The driver was asked to make a “U” turn. I could feel my heart pounding like a piston as we ran up the stairs to where I had been earlier. There, under the chair, exactly where it had been left, was a bag with several thousand American dollars in it. I have never felt so relieved to see some money.

The concert itself must have put out such powerful vibes that no one would dare touch that money. We were thus well protected. The music on Sun Ra Live at Montreux, released on Inner City and Saturn Records, is a most fitting musical description of what I had actually experienced in that city and on that stage. The Montreux performance stands as one of the high moments in my recorded history with the Arkestra. The recording captures John Gilmore’s incredible solo on Take the A Train, accompanied by Clifford Jarvis on drums. The intro that Sun Ra plays on piano shows he now owned the song written by Billy Strayhorn, one of the Ellington Orchestra’s standard signature pieces. In the wake of Ellington’s passing (1974), he also now owned the position that Duke once had as the preeminent big band leader. This was Sun Ra‘s first recording in a few years, and even though his Earth years were advancing (now 62), his sense of showmanship seemed heightened as he, dressed in platform shoes, colorful robe, and pseudo-space-helmet, played the organ with his hands behind his back.

The sound of Sun Ra’s piano introduction to El Is The Sound of Joy still sends chills up my spine. Before I left to go on that trip, the record that I had been listening to a lot was the great Massey Hall concert. I loved the way Dizzy (I finally got around to studying him) and Bird were playing with the incredible rhythm team of Bud Powell, Charlie Mingus and Max Roach. I believe Dizzy’s approach influenced my concept and approach to El Is The Sound of Joy. Clifford Jarvis, drummer on the Montreux recording, kidded me about our being a Clifford Brown-Max Roach hookup. In my estimation it was one of Sun Ra’s best recorded live concerts.
Posted by Steve Antonelli at 6/13/2008 08:58:00 PM