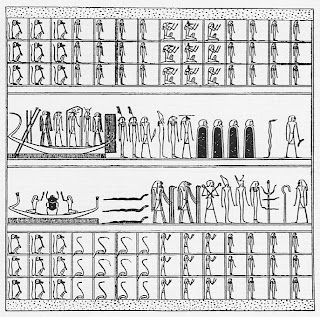 The god Re reigned supreme over the earth but the human beings revolted against him. In anger he sent the goddess Hathor to destroy them, but then changed his mind. He abandoned the earth and mounted on the heavenly cow, ascended into the sky in order to reign over them in the form of the sun. He had two ships to complete his daily journey, one for the day, the manedjet (manD.t), and another for the night, the mesektet (msk.t.t) [4]. In the west lay the gloomy Realm of the Dead, to which he brought some light and joy in the evenings. At the first hour of the day the sun sets out on its daily journey over Egypt with Re at the helm. Under the ship swims a serpent, a creature venerated by the Egyptians.

In the Book of the Dead there is a story of how the boat of Afu Ra (the sun god) passes the territory of the town of Sais.

"The region to the left of the god is one of fire, and close to the boat stands Horus who is working magic with the sake-headed boomerang which he holds in his hand, Before him stands the serpent god, called 'Seth-heh', i.e. the 'eternal Seth'. Before the boat is the great serpent Ankh-neteru, and twelve amikhiu gods, taking hold of the tow line, enter this serpent at the tail, and drawing the god in his boat through the body of the serpent, bring him out at his mouth. During his passage through the serpent Afu Ra is transformed into Khepera [1] and is now towed into the sky by 12 goddesses."

According to Egyptian beliefs, the soul of the dead accompanied the sun on its eternal journey in the Upper Waters (the heavens) around the world. A boat or at least a model of a boat was therefore included in every tomb.

The mast was bipod. A lookout was placed in the stern, slave rowers rowed to the beat of a drummer and the pilot steered with the double rudder. The place of the dead was under the canopy. The form of the boat is very similar to that of the reed boats. Both the stern and the bow were decorated with lotus flowers. Full sized sacred barges [3] were large, often longer than twenty metres. They were built of the best wood and decorated with precious metal. I built the august [barge] of new cedar of the best of the terraces; its bow and its stern being of electrum, making festive the lake [2]; to make his voyage therein at his feast of the "District of Peker." 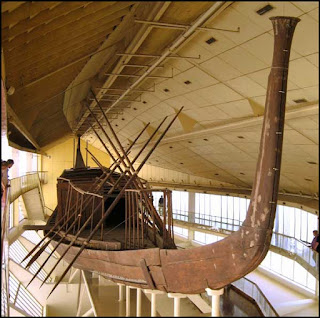