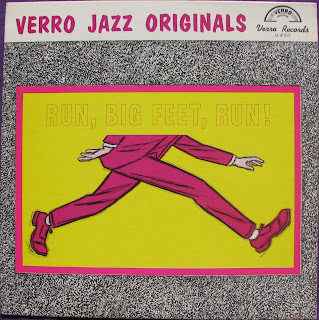 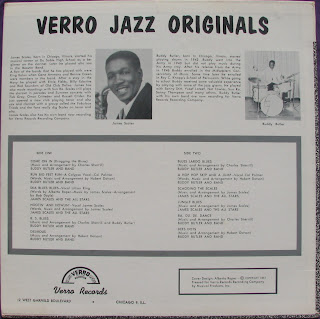 A couple of years ago, I found this listing at Jazzdiscography.com, under “Hobart Dotson”:

After extensive searching, a very clean copy of the Verro 12" LP (U-41512) was found. What is so amazing is that the Verro recording is less than 3 weeks after Sun Ra's first full album, Transition. There is a strong connection between the Verro album and what Sun Ra was doing during this time period; with the presence of Hobart Dotson, Julian Priester, Charles Davis, Ronald Wilson, and others.

The 12" Verro album contained all of what was listed at jazzdiscography.com and more. Some of the tracks sound very "Arkestral". Here is the text that is found on the back of the album cover:

James Scales, born in Chicago, Illinois, started his musical career at Du Sable High School as a beginner on the clarinet. Later he played alto sax in the Booster Band.

A few of the bands that he has played with were King Kolax when Gene Ammons and Bennie Green were members in the band. After a stay in the Navy he played with Ernie Fields, Billy Eckstine and Red Saunders of Old Club Delisa. James has also made recordings with Sun Ra. Scales still plays the clarinet in parades and Summer concerts with Tick Gray, Omar Critteden and Russell Crider. He just opened a new club playing tenor and alto sax and clarinet with a group called the Fabulous Triads and the fans really dig Scales on tenor and alto.

Buddy Butler, born in Chicago, Illinois, started playing drums in 1942. Buddy went into the Army in 1943 but did not play music during his Army stay. After his release from the Army in 1946, Buddy enrolled in the Midwestern Conservatory of Music. Some lime later he enrolled in Roy C. Knapp’s School of Percussion. While going to school Buddy received some valuable expørience by playing with some of the jazz giants. He played with Sonny Stitt, Yusef Lateef , Nat Towles, Sun Ra, Sonny Thompson and many others. Buddy Butler with his own band are now recording for Verro Records Recording Company.

HOOTIN’ AND HOWLIN’ - Vocal James Scales
(Word, Music and Arrangement by James Scales
JAMES SCALES AND THE ALL STARS

Would love to hear this one...

I have a sealed copy of this record. :D