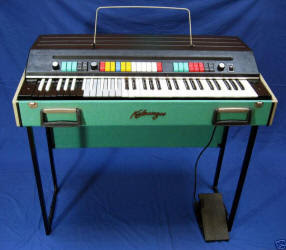 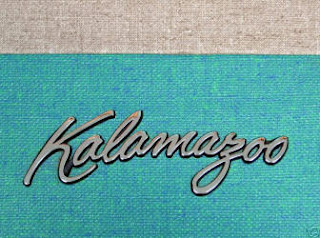 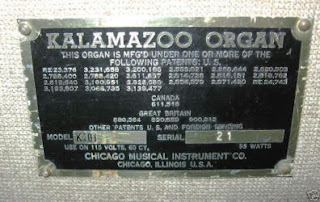 The G101 was introduced as the Kalamazoo K101, but shortly thereafter was renamed the Gibson G101. I had thought it was introduced in the summer of 1967, but one Gibson owner reports that his vibrato board is stamped 22 Jan 1966. The K101 is a rare beast indeed. This is the one used by Ray Manzarek. He initially used a Vox Continental, but eventually decided to replace it. Here's what he had to say in a 1977 inteview in Keyboard Magazine:

"I used a Vox for about two-and-a-half albums. Then Vox was sold to somebody and the organs started falling apart. I'd go out on a gig and in half a set I'd break about six or seven keys. I eventually got a Gibson Kalamazoo. It had a little more versatility than the Vox; it could make the sort of piano-ish sound I used on "Back Door Man" [from The Doors], plus it had a little knob sticking up on the volume pedal which could bend the note a half-step down. We used it on "Not To Touch The Earth" [from Waiting For The Sun, Elektra, 74024]. Even synthesizers don't really do that."

What he's referring to is the takeover of Vox organ production by the Italian company, EME in 1967. Seems like he could have just bought a US or UK Continental with wooden keys, but maybe they were too hard to come by at that point. At any rate, he also needed an organ with a flat top to hold the Rhodes Piano bass, and the Kalamazoo fit the bill. The Gibson G101 is identical, except for the nameplate. This fellow is sometimes mistaken for a Farfisa Compact because the cabinet design, with the fold-out legs and all, is very similar (it fooled me the first time I saw Manzarek playing one).

The G101 has a LOT of voice and effect combinations, which I will attempt to explain here
Voices: The White tabs are known as the "Flute voices", and the Yellow and Blue tabs are the "non-Flute voices". The Mixture tab adds a combination of 8', 4' and 2-2/3' sounds, but using different filters than the other tabs. It's a very bright-sounding voice.

Glide/Trumpet Wow-Wow: The Glide switch controls the function of a side-lever on the foot pedal. When set to "Normal", it bends the pitch down a half-step, when set to "Trumpet Wow-Wow", it gives what's commonly known as a wah-wah (but it really does sound like "wow") effect to the Clarinet 16; Trumpet 8', Sax Bass and Fuzz Bass voices only. An odd side-effect of the circuitry is that when set to Glide, pressing the lever not only drops the pitch, it also reduces or eliminates the Vibrato effect.

Sustain/Staccato: With the Sustain and Staccato tabs all off, the keys have a rather slow, or "soft" attack envelope. Turning on the Staccato tab makes this attack much shorter, more in line with what you'd expect from a typical combo organ. The Sustain Med and Long tabs add a sustain time after key release. Turning on the Staccato tab along with the Sustain tabs on shortens the sustain time significantly. The "S-St-P" markings on the Trombone and String tabs only indicate that, in conjunction with the Sustain and Staccato tabs, these voices resemble a Piano and Harpsichord, respectively. And they really do - well, in line with the technology available at the time!

Percussion/Repeat: Percussion changes the volume envelope for the non-flute voices to a sharp attack followed by quick decay. When used in conjunction with the flute voices (which are unaffected by Percussion), it provides a sort of Hammond-type percussion effect. Unlike Hammond percussion, it's a re-triggering effect -with an odd twist. If any keys are being held, and an additional key is pressed, the percussion effect re-triggers for ALL the keys pressed. (I'm told this is exactly how Farfisa percussion works, too) When the Repeat knob is on, the percussive attack repeats itself, at a rate determined by the Repeat knob setting. When the Repeat function is on, pressing any key will cause the Percussion to retrigger with the keypress, so you can get some unusual effects by holding and pressing keys off-rhythm from the Repeat rate.

The Percussion/Repeat is probably the one of the most likely features to fail in any of the Gibson/Lowrey combo organs. The heart of the matter is a small metal tube containing a neon bulb and two Light-Dependent-Resistors (LDRs). What usually happens is the bulb darkens over time, or fails altogether, and can't supply enough light to activate the LDRs Replacing this bulb usually solves the problem.

Bass Octaves: The lowest (black/white) octave is a fixed bass octave. The next octave (grey/white) is switchable between bass and treble, by using the "Extended Bass" switch. Both octaves are fully polyphonic, and both produce the sound selected by the three Bass voice tabs.

Reverb: This tab is really just a switch for an external reverb - there's no internal reverb in the G101. According to the owners manual, it was designed to work with either the Maestro Reverb TR-370 amp or the Gibson Combo Reverb amp (neither of which I've ever seen). What the switch does is send the organ output to the "ring" (middle part) of a TRS plug. If you're using a standard 1/4" cable and amp, and you find that you don't get any sound out of the organ unless you turn the Reverb tab on, then you haven't pushed the 1/4" plug far enough into the jack, and it's making contact with the middle contact.
Posted by Christopher B. Eddy at 6/09/2008 09:20:00 AM