Ra Materials: Hundreds of artifacts from Sun Ra’s Chicago years nearly wound up at the dump. 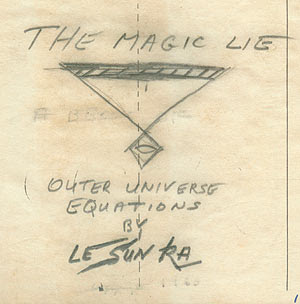 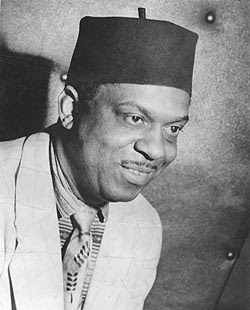 ONE AUGUST DAY six years ago, John Corbett got a mass e-mail containing some disturbing news: a collection of artifacts related to the charismatic, radical jazz musician Sun Ra was in danger of landing on the trash heap.

A professional salvager—someone who gets paid to liquidate the contents of houses that are about to be sold or demolished—had uncovered the materials on the job and shown them to a friend who liked “spacey stuff. She immediately recognized that it was some stuff that had to do with Sun Ra,” Corbett says, and began e-mailing around to see if anyone might want to buy it.

Corbett, a music critic, co-owner of the Wicker Park gallery Corbett vs. Dempsey, and a teacher at the School of the Art Institute, is a Sun Ra fanatic, but he nearly deleted the e-mail after he read it—he figured that somebody else would save the stash if it wasn’t already gone. But instead he decided to meet with the sender, a former teacher at the School of the Art Institute who Corbett says wishes to remain anonymous. She told him the Sun Ra archive was still there.
The house being cleared out, it turned out, had belonged to Alton Abraham, Sun Ra’s business manager. Abraham had died a year earlier and the house was being sold by his ex-wife, Catherine Baymon. “By the time we got down there it was just three days before the house changed hands,” says Corbett. Baymon had already sorted through the materials and set aside some items she wished to keep. She’d also already disposed of some items that Corbett now thinks may have had historical value. “A lot of great stuff got thrown away before we were there,” he says. “And while we were there a whole wardrobe’s worth of clothes, which probably included a lot of the early costumes, was thrown away.”

But what remained was a treasure trove of Sun Ra ephemera: album art, recordings, writings, ledgers, and scraps of paper like ticket stubs and gig flyers. It’s this material that forms the bulk of an astonishing exhibit that opens Sunday at the Hyde Park Art Center, “Pathways to Unknown Worlds: Sun Ra, El Saturn & Chicago’s Afro-Futurist Underground, 1954-68.”

It wasn’t until Sun Ra and his band, the Arkestra, moved from Chicago to New York in 1961 that the world took notice of the bandleader, pianist, and philosopher. “Pathways” sheds new light on his lesser-known early years. Sun Ra, who died in 1993, spent years crafting an outsize persona, proclaiming himself an Afro-futurist visionary from Saturn who believed that, because planet earth was doomed, “space is the place.” His music was a singular mix of big-band arrangements influenced by Fletcher Henderson, Duke Ellington, and Tad Dameron, free-jazz improvisation, hard-bop rhythms, experiments with electronic keyboards, and African and Latin grooves; his live shows were vaudevillian affairs featuring dancers, fire-eaters, and colorful costumes. But though he was a very active performer in Chicago during the late 50s, he was also an obscure one, playing mainly for small black audiences.

Corbett bought the lot from the salvager (he declines to say how much he paid), and for the past six years he and his wife, Terri Kapsalis, along with a crew of volunteers and advisers, have painstakingly sorted through his purchase, which filled two 10-by-12-foot storage spaces. “You had little eureka moments that were mind-boggling,” Corbett says. “I had the great joy of looking through a box and finding a manila envelope that said ‘one of everything,’ and it contained a huge collection of original manuscripts for Sun Ra’s broadsheets and leaflets that he made in the 50s.” Hundreds of hours of audiotape—including studio masters, readings, rehearsals, and interviews—are now housed in the Creative Audio Archive at the Andersonville nonprofit Experimental Sound Studio. They’re being transferred to digital formats and annotated; once that process is completed, says Corbett, the tapes will be available to scholars and a full list of their contents will be placed online.

Some of that material has already made its way to the public. Corbett has issued two CDs of previously unreleased music, 2002’s Music From Tomorrow’s World and 2003’s Spaceship Lullaby, on his Unheard Music Series label. And in August local publisher WhiteWalls released The Wisdom of Sun Ra, a fascinating collection of his broadsheets, which combined black nationalist philosophy, biblical allusions, and elaborate—if fantastical and absurd—etymological theories. (“Negroes belong to the race of Mu,” he wrote in one broadsheet. “Another way to spell Mu is moo. Moo means low. That’s the cow’s word. Negroes are Mr. Moo.”)

From the moment he discovered the material, Corbett wanted to keep it together as a singular archive of Sun Ra’s Chicago years, and he hopes eventually to find an institutional home for it. “It only articulates a story if it’s together,” he says. “Little bits and pieces of it are collector fetish ephemera, but when it’s all together you start to see this interesting phenomenon . . . which is the way that Ra sort of fit into a southside Afro-futurist community of thinkers, designers, and musicians who were all pondering the future, independent businesses, and separatism.”

Corbett first learned about the existence of Sun Ra’s Chicago writings when he interviewed Abraham in 1993 for his ’94 book, Extended Play. But until he came across this material, there was little documentation of Sun Ra’s life in the 50s in the public realm—the sole example of his writings from this period was a broadsheet he gave to John Coltrane. “[The archive] sheds some light and fills in a lot of details,” says Yale professor John Szwed, author of the definitive Sun Ra biography, 1997’s Space Is the Place. “It puts him in the middle of what was being discussed in the parks those days, where there was a real tradition of political and theological discussion.”

The show at the Hyde Park Art Center, which was curated by Corbett, Kapsalis, and WhiteWalls editor Anthony Elms, has multiple parts. “Pathways to Unknown Worlds” features more than 60 pieces of art on the walls and numerous display cases containing Sun Ra-related arcana, such as notebooks and homemade instruments; two multimedia rooms will present a pair of Sun Ra documentaries, a slide show of photos, and two hours of his music, most of it previously unreleased. Elms and Northwestern University art history professor Huey Copeland have organized a second exhibit that opens October 15, “Interstellar Low Ways,” which collects work by artists influenced by Sun Ra, including legendary Parliament-Funkadelic album artist Pedro Bell, composer Charlemagne Palestine, local cartoonist Plastic Crimewave, and members of the Destroy All Monsters art and music collective. Both exhibits run through January 14, 2007.

In addition, Corbett has organized a two-day symposium on November 11 and 12 called “Traveling the Spaceways,” where Szwed and other Sun Ra scholars will join artists and art historians to discuss his work. Actress Cheryl Lynn Bruce will read from his writings, and various musicians, including Nicole Mitchell, Fred Lonberg-Holm, Thurston Moore, and Ken Vandermark, will play music by and inspired by Sun Ra. Lastly, on December 3 the Chicago Cultural Center will host a discussion and performance featuring original members of the Arkestra and other associates.

Though nothing has been finalized, Corbett says he plans to tour “Pathways to Unknown Worlds” around the country and Europe as he begins to search for a permanent home for the archive. But for now he’s giddy about finally revealing what he’s been processing for six years. “Finding this stuff was like a lightning bolt hitting me,” he says. “It’s just about the most exciting thing I’ve ever done. It’s been a thrill, and I wanted to share it with as many people as I could.”
Posted by Christopher B. Eddy at 6/07/2008 04:55:00 AM