Montreal will be awash with jazz in the next few weeks, with a total of four festivals going on. There’s not only the International Jazz Festival that everyone around the planet knows about, but also two equally appealing festivals (if not more so, for hard-core jazz fans) following in short order, plus the festival Bryan Highbloom has been offering at the Jewish General Hospital. That spells a lot of music.

As usual, veteran musicians are a big part of the draw, whether they are jazzers, like pianist Hank Jones, or jazz-related like the Queen of Soul Aretha Franklin, who is still belting it out. Locals like drummer Guy Nadon and pianists Oliver Jones and Vic Vogel are also in on the fun. All of these performers are appearing at the high-profile Festival International de Jazz de Montreal. The two other festivals, the Suoni Per Il Popolo (run by the Casa del Popolo) and the Off Festival (run by and featuring Montreal musicians), have an equally interesting lineup, and this year they are teaming up to present a couple of events, the most prominent being the Sun Ra Arkestra.

Led by Marshall Allen after Sun Ra’s passing in 1993, the Arkestra follows the big band tradition but with an avant-garde twist, as likely to play When You Wish Upon a Star or There Will Never Be Another You as they are to revisit Sun Ra’s quirky themes like We Travel the Spaceways or one of the many tunes Allen has penned. Formed in the 1950s, the Arkestra is still thriving. I spoke to Marshall Allen, who still lives in the Sun Ra house in Philadelphia, a couple of days before his 84th birthday as he was preparing for a celebration in New York at Sullivan Hall.

I asked him about his long association with the band and about his long life in music. “It contributes to my well-being and in my 80s, that’s what I’m doing,” he said. “When you’re younger, you’ve got adventure, you’ve got a strong drive to move forward and get something down. Now I’m not that youthful, but there are still things I want to do, and I don’t have to go through a lot of that stuff like when I was younger. Now I have more time to stay with the music and more time to concentrate.”

He went on to tell me about life before Sun Ra, playing in Paris, Germany, and England, and spending time in the Army until he met Sun Ra in Chicago. “He lived a few blocks away from me and he rehearsed his band, and I went to rehearsals and listened and his other band in New York was breaking up and I got into the new band.”

That was 1958, and Allen waxed enthusiastic when he realized that this year marks the 50th anniversary of his joining Sun Ra. “Back in those days I didn’t think I’d still be playing in the band in 50 years,” he said in his endearing Kentucky drawl.

He has a simple answer to what keeps him committed to the band: “It’s the music! Sun Ra was a good teacher and that was like a gold mine. All I had to do was put in the time.” The time, in this case, has meant a whole career devoted to the Arkestra, which has required a lot of study, given the founder’s unique vision.

But there are also more practical issues: “Through the years, music gets displaced, songs are there with no names on them. It’s quite a thing to try to get the parts back together. It’s like a puzzle.”

He also still studies the challenging music: “Sometimes there’s time against time, or different times together. He always had a large band and a lot of stuff going on. So I just do the main thing and sometimes rework some of the music. He has about a thousand pieces, some of which haven’t been played yet. He would write for different people, change things, chords, melodies, depending on the person who would be playing… tailor made. So I still got some challenges, interpreting the music.”

The audiences are still coming to the concerts and include lots of young people. “We make a little story with the band going way back and coming right on up, so it’s like a music lesson for those who weren’t born. We show them what they were doing in the 30s and early 40s and what they’re doing now.”

The Sun Ra Arkestra under the direction of Marshall Allen will perform at the Sala Rossa Sunday, June 14 at 8:30 pm. 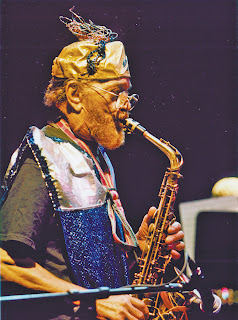