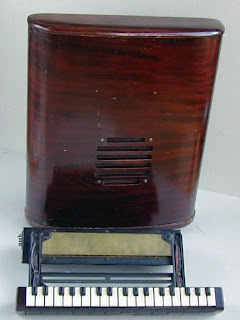 The Solovox was designed by Alan Young of the Hammond Organ Co and manufactured in the United States between 1940 and 1948.The Hammond Solovox was a monophonic keyboard attachment instrument intended to accompany the piano with organ type lead voices.

The 3 octave short keyed keyboard was stored on a sliding mounting under the piano keyboard with a knee operated volume control. The Solovox was connected to the electronic sound generation box and speaker housing by three thick cables. The sound was derived from a single LC oscillator which had a frequency range of one octave. The signal from the oscillator was then passed through a series of 5 frequency dividers to create a further two octaves. The Solovox (J+K models) used two vibrating metal reeds modulate the oscillator frequency to create a vibrato effect, in later models this was replaced by a second oscillator acting as a vibrato oscillator.

On the front of the instrument below the keyboard there were a series of large thumb operated buttons for oscillator range (switch-able +/- 3 octaves: 'soprano', 'contralto', 'tenor', 'bass'), vibrato, attack time, 'deep tone', 'full tone', '1st voice', 2nd voice', 'brilliant' and a switch for selecting woodwind, string sound or mute. The Solovox was able to create a range of string, woodwind and organ type sounds and was widely used in light music of its time.

The Solovox was invented by Hammond engineer John Hanert in 1940. Laurens Hammond built the Solovox in the Midwest (Chicago) area of the U.S. in the early 1940's. The solovox was a monophonic instrument with a tube oscillator as a sound source. The tube oscillator had had a frequency band of one octave. Higher and lower octaves were derived via tube frequency dividers. On the front of the instrument there were controls (called "Stops") for oscillator range, attack time, and timbre.

The Solovox consisted of two units: The keyboard, which was intended to be mounted beneath a piano manual, and the tone cabinet, which housed the amplifier and speaker. The disadvantage of the solovox to that of the clavioline was that the solovox had a large and heavy wooden tone cabinet that was not quite portable and easy to move around. It could be attached to the side of an upright piano or mounted directly beneath the belly of a grand piano.

The Hammond Solovox had what was called divide down circuitry. A solovox key would trill downwards whereas a clavioline key would trill upwards. In other words, if one key was depressed on the solovox, and one below it was depressed at the same time, the solovox would only produce the sound of the lower key. With the clavioline, the higher key depressed would have the sound produced. Both key sounds would not be produced as both keyboards were monophonic (single note playing) instruments. The tuttivox however was a polyphonic (multiple note playing) instrument.

Another look at a different model of the tone cabinet. This 50's model shows improvement to that of the 40's model. Here some of the tubes have been hidden behind a wood panel (above). Below, the tubes are exposed and the tone cabinet looks more archaeic.

This vintage solovox folio contains songs of the time in which the solovox could be used to play and compliment the piano. As shown in the illustration, the solovox keyboard fits snuggly below the piano's manual.