Struggling to Keep the Band and Legend of Sun Ra Alive 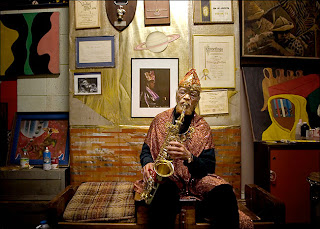 Struggling to Keep the Band and Legend of Sun Ra Alive

PHILADELPHIA - In the Germantown neighborhood, an 81-year-old bandleader and alto saxophonist is struggling to maintain a crumbling town house and a legendary big band.

The bandleader, Marshall Allen, lives in a three-story row house on Morton Avenue that since 1968 has been the headquarters of the Sun Ra Arkestra, the avant-garde big band that the keyboardist and free-jazz pioneer Sun Ra formed a half-century ago. Sun Ra died in 1993 at 79, and now Mr. Allen leads the group.

One recent evening at the Sun Ra house, an elderly man with a guitar case was dozing on the porch. Mr. Allen opened the door and shooed him away.

"We still get cats coming by here like it's the old days," said Mr. Allen, who had been spackling the bathroom ceiling. "I can't run the place like that no more. It was different when Sun Ra was alive. He could take in all these nutty musicians and bring out the good in them, but I ain't that talented."

In those old days, the band lived communally in the house, where Sun Ra wrote songs and arrangements and rehearsed and recorded the band, often around the clock.

Now it is quieter and emptier, home only to Mr. Allen and three other band members. The Arkestra is still together; some members have been with it since the 1950's and 60's. After some lean times when it was in danger of folding, the band has rebounded in recent years. It played some 30 dates last year, including gigs in Europe, Brazil, a Buddhist temple in Tuva and the Manhattan nightclub Iridium.

Mr. Allen toured for two weeks with the bassist Henry Grimes this year, and is about to return to Tuva with a small group and to perform with the Arkestra in Austria and France in early July. But he complains that the concerts do not pay enough to keep the entire band together like an extended family, the way Sun Ra did. Mr. Allen often has trouble scraping together a full ensemble (anywhere from 13 to 19 pieces) even for weekly rehearsals and must call upon Arkestra alumni to fill spots.

"We have a nucleus that still rehearses and lives together here," he said, standing in the ground-floor rehearsal room where Sun Ra held marathon rehearsals. "We play several days a week. Not every day like when Sun Ra was alive, but whoever's here, we rehearse."

Sun Ra required the band members in the house to follow a disciplined regimen based on his musical and philosophical concepts, which Mr. Allen and the others still follow. Mr. Allen writes daily for the Arkestra, composing new music and rearranging Sun Ra's.

"I'm juggling too many things just keeping the place together," said Mr. Allen, who took over as band director after the 1995 death of the tenor saxophonist John Gilmore, another longtime member of the Arkestra.

The old house is a museum dedicated to Sun Ra, filled with his music, possessions and other memorabilia, and Mr. Allen often books engagements just to maintain it and pay the taxes and bills. In all, the Arkestra has released more than 100 self-produced records, Mr. Allen said, as well as several albums on established labels. But the meager royalties go to Sun Ra's family and former business partners, not the current band.

"We get no royalties," he said. "I got no money. I'm sitting on zero. If we had more bookings, the band would be stronger. Then we could rehearse steady and play numbers we ain't never played. You got to have money to run a band. Bills have to be paid. I can't even pay a musician's carfare to get down here."

The band still plays music that alternates between straight-ahead swing arrangements and squealing solos. The concerts still feature free-form dancers, light shows and musicians in outlandish costumes marching through the audience while chanting and singing. Band members often use megaphones to sing songs with the cosmic themes that were the trademark of Sun Ra, who claimed to be from Saturn and described his concepts with outer-space imagery.

He spoke of making music sublime enough to elevate humanity beyond Earth, to transcend reality. He spoke of a world in which people traveled in cars and rocket ships powered by music alone.

The Arkestra never was as popular as jazz's best-known big bands, but it did have a steady following and was highly regarded in jazz circles. It appeared on "Saturday Night Live" in 1978, played a Central Park concert with Sonic Youth in 1992, and was named best big band in Down Beat magazine's critics poll five times between 1985 and 1992.

In 1968, Sun Ra moved the band from the Lower East Side of Manhattan to a house in Philadelphia that Mr. Allen's family owned but gave to him for the band's headquarters. It still belongs to the Sun Ra estate.

Mr. Allen was interviewed in a third-floor room where several of Sun Ra's old electronic keyboards leaned sideways in a jumble in the corner. In another corner was a tall wardrobe cabinet containing hundreds of Sun Ra's original music scores, much of them never recorded.

"I got 40 years worth of his music here, him writing songs every day," said Mr. Allen, who was watching a sports show on television and was intermittently using an electronic keyboard to work on his own compositions, which are decidedly Sun Ra-influenced. "I was there when he wrote most of his stuff. I seen him write everything since 1958."

That was the year Mr. Allen joined the Arkestra. He grew up admiring the styles of swing-era saxophonists like Johnny Hodges, Don Byas, Willie Smith and Earle Warren but eventually developed an avant-garde style, mastering overblowing techniques, false fingerings, note manipulations and extreme registers. He frequently solos on alternate instruments, including a gadget called an E.V.I., or electronic valve instrument.

The room was adorned with Egyptian and African art, psychedelic paintings and tributes to Sun Ra. His walking stick was mounted on the wall. The room was cluttered with kitchen items, instruments and tools for fixing them. The books on the shelves were mostly on mystical subjects, outer space and ancient Egypt. Outside in the hallway hung a sign containing an Arkestra credo, "Play what you don't know" - the reverse of a popular musical axiom.

There were dried roses from the funerals of both Sun Ra and John Gilmore.

Then one of his housemates, the tenor saxophonist YahYa Abdul Majid, came into the room and said to Mr. Allen: "Let me borrow $5. I'll pay you tomorrow."