A Short History of the EVI By Ron Cole 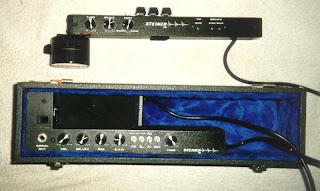 A Short History of the EVI By Ron Cole

the first chapter of Ron Cole's doctoral dissertation, "The Electronic Valve Instrument: Nyle Steiner's Unique Musical Innovation," submitted to the University of Washington in June of 1998. It has been edited for use at this website.

The basic concept that was to give birth to the Electronic Valve Instrument (EVI)1 began in 1964. Nyle Steiner, a trumpeter, music student, and engineering employee at an electronics firm, envisioned an electronic string instrument in which the string fingerings could be manipulated utilizing trumpet-fingering technique. He states,

The technology wasn't anything similar in those days but I had some ideas of making an electronic device. I was going to make a tone by having a wire vibrate with things pushed down on the string to lengthen or shorten it. I was trying to figure out how to do the overtones on the wire.2

This project was shelved in favor of the formation of Steiner-Parker Inc., a Salt Lake City based partnership with fellow engineer Dick Parker, which began designing keyboard-based synthesizers in the late 1960s and early 1970s. Steiner was responsible for design of the electronic portion while Parker designed and built the cabinetry and enclosures. Since Steiner was not a keyboard player, he resurrected his concept of using a trumpet-based controller to manipulate a synthesizer tone generator. His original goal was to create a synthesizer that trumpet players could easily play without having to learn keyboard-fingering technique. Steiner stated that,

The ultimate thing in the beginning was to make a trumpet interface so that any trumpet player could pick it up and say, "Hey, I can play the synthesizer now." But that didn't turn out to be practical; it turned out to be easier to learn some new techniques but have the instrument really be powerful. So, in certain ways, if we try to imitate all of a trumpet we also imitate some of its limitations.3

Development of the EVI began in 1971, with the first prototype being produced the next year.4 Commercial availability began in 1975.5 Steiner estimates around 200 Steiner-Parker EVIs had been produced between 1975 and 1979, many of them having been sold to university music departments and pop groups. He noted that,

We sold them around the colleges and universities. I remember (the pop group) Earth, Wind and Fire had one. They were one of the first systems we sold. Columbia-Princeton University ordered a couple of them.6

The first EVIs controlled only on/off tone generation in a dedicated synthesizer module, initiated by blowing into the breath pipe of the instrument, which activated a breath (air pressure) sensor. No air actually passed through the airtight instrument; the performer actually allowed air to pass from the mouth around the outside of the breath pipe to simulate the airflow through a wind instrument. Octave selection was achieved via a rotating canister and thumb-rollers, and pitch via three springed switches positioned to emulate trumpet valves.7 Toward the end of the 1970s, many of the added features associated with the later EVI versions were incorporated into the design, including CV (control voltage) directed volume via manipulation of air pressure at the breath sensor, a vibrato sensor, a "bite sensor" for controlling a portamento effect, and pitch bending plates (albeit retro-fitted by Steiner). Several commercially available synthesizers were also interfaced for use with the EVI, such as the Mellotron.8

Steiner-Parker Inc. dissolved in 1979, and Steiner was left with the rights to the EVI. That same year, he began a five-year relationship with Crumar, an Italian electronics firm in the business of designing and marketing keyboard-based synthesizers. The Crumar EVI, which debuted commercially in 1980, had all of the previously mentioned features plus the benefits of larger manufacturing and marketing resources, much more than Steiner and Parker had by themselves. The Crumar instrument sold more than double the amount of the Steiner-Parker EVI, around 500 units.9 Toronto trumpeter Bruce Cassidy of the jazz-influenced rock group Blood, Sweat and Tears made one of the earliest recordings using the Crumar EVI.10

The debut of the Musical Instrument Digital Interface (MIDI) specification in 1982 had enormous repercussions throughout the world of electronic music, not the least of which was the obsolescence of many makes of commercially marketed synthesizers. Some pre-MIDI synthesizers were adapted for MIDI uses. J. L. Cooper Electronics constructed MIDI adapter modules for several synthesizers, one of which was the Lyricon, a wind controller using woodwind-fingering technique, which was popular in the 1970s. Jim Cooper rewrote the software specifications of his Lyricon MIDI adapter for the Crumar EVI’s accompanying synthesizer module, and Steiner adapted the hardware interface. This allowed the Crumar EVI to transmit MIDI note on and note off, aftertouch, pitchwheel (pitch bend), and breath control (which could be used to control several effects, including volume). Los Angeles based studio musician Judd Miller to this day continues to use this version.11 Crumar never incorporated these MIDI functions into its EVI model and, in fact, never produced more than one model. Crumar ceased production of the EVI in 1984, and discontinued operations entirely in 1987.12
Posted by Christopher B. Eddy at 6/13/2008 11:12:00 AM