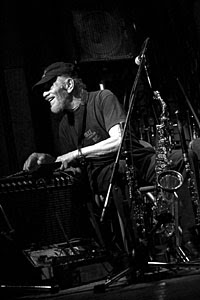 A member of Sun Ra's Arkestra from 1958, Marshall Allen was there at the inception of the avant-garde jazz scene in the 1960s. Sun Ra, who died in 1993 -- or was transported to another planet, as the eccentric artist always insisted would happen -- led one of the most experimental, and controversial jazz orchestras of that, or any, time. Allen played saxophone, and any other instrument Sun Ra encouraged him to, and later took over leadership of the Arkestra and Sun Ra film and music archives. He has continued to innovate and collaborate well into his 80s.

Long before their nearly mandatory use in '60s rock shows, Sun Ra experimented with lights, costumes, dancers and background films. His uncompromising approach to music included not only esoteric creative principles and an obscure cosmology of music, space and history, but one of the wildest concerts experiences around (captured on the 1974 film "Space is the Place").

While recently on tour in Japan, Allen reminisced about Sun Ra in an interview at his hotel and explained why he has chosen to collaborate with filmmaker James Harrar. More than half Allen's age, Harrar's original films and edited archival footage acted as the impetus for their improvisation. Allen's spryness and easy laugh, undiminished by months of worldwide touring, were evidence that creating rare and challenging art -- whatever the medium -- is a very good life indeed.

Is it different playing music to film?
No, not really. The music is made to fit the film. It's like any other thing you put music with. Other movies have a story, though. We had some story behind this one too, I guess, but we don't really have a story. I watch the film, and James tells me what he feels about it. We talk a lot about the film and what he's doing with it, and what particular segments might fit in terms of music. He knows the film better.

You must know the archival films of Sun Ra better though.
Yeah, well, I'm in them! These are just bits and segments. Sun Ra made a lot of films. Some have sound with actions, and some we were going to put music behind later. In his head, he did everything; he directed, put in the music and made films that explained his ideas. He always made loads of film. No one could put them together but him. We had photographers and filmmakers with us all the time.

What kind of films did Sun Ra do with the band?
We had one dancing in the streets and one at the Sphinx. The lights, the costumes, and all those things, he was doing those long before anyone else. He's got these blinking lights, strobe lights and little robots running all over the place. He had people recite his poetry. Then, there was another one where the whole band would have a painting. Everyone in the band had a painting, and we'd walk around the audience to show them, while the others were chanting or drumming, you know.

So, Sun Ra wanted to combine music and art?
Sun Ra wanted to represent art, music and power, all together. That was in the '60s. We had the music, but Sun Ra wanted a show band with color and sound. He had big bulbs on stage flickering and he'd show movies behind the band. All of that in one show.

Did that distract from the music?
It was a show band. Sun Ra had a good swinging band with good percussion and syncopation. He wanted to keep the rhythm for the dancing girls. He always had eight or 10 dancers in the band, really good dancers. We'd watch them as they danced, and play music for them. Early on, Sun Ra did music for all those early show bands, Lionel Hampton, Dizzy Gillespie and others. That was always part of it.

Are all those films in the Sun Ra archives?
He did quite a bit of film, but somehow they got scattered. Some are all cut up, and just little parts are left. The BBC has some interviews. Somebody has got them, but it's all over the place. When we made the films, Sun Ra was always adding missing parts, he just kept adding stuff. It was quite a mess. Only Sun Ra could figure it out, like a jigsaw puzzle. But he went to another planet.

Were the films part of Sun Ra's philosophy?
For Sun Ra, music was the language. He was bringing people into the new age. He would get a bunch of people together, and then he would close the circuit. He was constantly talking. Expressing all these things that you didn't understand. He always said that the music is not for now; this is for the future. So, everybody that heard the music was in another dimension. Now, a generation is here and they can understand what it was. If you didn't understand and see then, you can now.

Improvisations with experimental films and Sun Ra archives
After starting to work with Marshall Allen 10 years ago, filmmaker James Harrar Harrar was granted the unusual honor of being put in charge of Sun Ra's massive archive of movies. Harrar first got deeply into film at his university, which just happened to be close to Berks Filmmakers, one of America's oldest experimental film centers. His work since then has revolved around repeated images and "sculptures of light." After years of creating movies with no sound, Harrar became intrigued with Sun Ra's work and started to improvise live music to accompany his films. Since then Harrar and Allen have evolved an intriguing blend of avant-garde music with experimental footage. Equal parts contemplative, innovative and disturbing, the films and live music offer few easy entry points, but have provoked strong reactions in Japan. During his first tour of Japan with Allen, Harrar took time to talk about his works.

Have you had a good response on this tour?
Amazing. There's a huge well of images that we all dip out of. A lot of people found a lot of early Shinto inherent in the imagery. I deal with natural forces, spiritual states of mind and philosophical issues. The audiences here tell me that they don't regularly get stuff like this in Japan, and wish there was more.

Can you elaborate on the reactions you received?
The audience wants to know if it's all completely improvisational or if it's rehearsed. They are surprised to find that although it sounds and looks free, it's highly structured. I don't mean to say we do the same show every night, we're not interested in doing that. But you know: rehearse, rehearse, rehearse. Me and Marshall have been doing this for a long time, so we know where the images stop and where they start.

How is that different from in the States?
When audiences there start to get the sense they are feeling something, unfortunately, their first reaction is to close off. I think sometimes, either consciously or unconsciously, they start to hate the artist, maybe because they are being made to feel something they don't understand. Some people just don't like the idea of a stranger touching them in a psychological or intimate way.

Then you intend them to be intimate experiences?
When I make the work, I'm trying to create a vehicle for everyone to have an experience. But the viewer has to do the work. There is no narrative; it's purely visual. The responsibility on their part is to feel it and let it happen. In the States, the reaction is to resist it, especially for personal art.

By personal art, do you mean non-narrative film?
Not just that. There's a story line between some of the images, but basically, you could come into the story at any point and not know if there is any beginning, middle or ending. Some have stories, but they are essentially [Online article is cut]
Posted by Christopher B. Eddy at 6/06/2008 08:56:00 AM