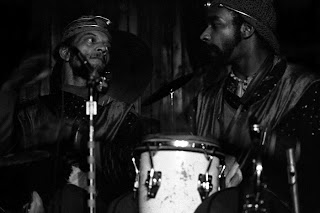 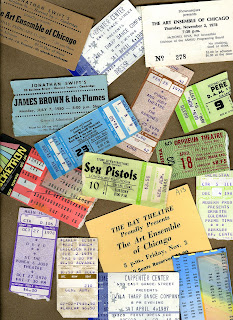 This entry is added with permission from Joey Harrison. Thank you Joey! Please post more from your personal collection for all of us to enjoy!

Marshall Allen and Danny Davis, circa 1975

When I was in high school, the older brother of a classmate of mine introduced me to The Fugs, Captain Beefheart, the Art Ensemble of Chicago and Sun Ra. I didn't like any of it. It all sounded like noise to me. But, still, I couldn't get the sounds out of my head. After reading a cover story in Rolling Stone (then printed on newsprint), I bought Capt. Beefheart's "Trout Mask Replica." It mostly sat at the bottom of a drawer. But every month or so I'd pull it out and try it again. There was something about it that appealed to me, even while another part of me was saying that it was all wrong. Within a year or two I loved the album.

Even though I was already a jazz fan, I had a harder time with Sun Ra. I think that may have been because his recorded output is so spotty. It wasn't until I started seeing the Arkestra live that my admiration really soared.

During the seventies and eighties I saw the band perform many, many times -- in East Lansing, Michigan (where i grew up), in Detroit, in Toronto, in Ann Arbor, in Chicago, and in Boston.

I found these in a file folder. Hadn't seen them in years. My only question is where are the rest? Offhand, I see I failed to save the stubs for concerts by Philip Glass, Sun Ra, Captain Beefheart, Steve Lacy, Muzsikas, the McGarrigles, Patti Smith, John McLaughlin, Joni Mitchell, Charles Mingus, Polyrock, the Bloodless Pharoahs, Rahsaan Roland Kirk, Medeski, Martin & Wood, Sonny Rollins, the Mothers of Invention, Miles Davis, the Master Musicians of Joujouka ...
I'm sure I'm forgetting a bunch more.
Posted by Steve Antonelli at 6/10/2008 02:10:00 PM

Hey Joe
Lotta water under the bridge Glad you got into that great stuff. As for me, I went to msuic school, a now specializing in synths and also am a lawyer.. still listen to"outside" stuff and am generally as monumentally iuninterested in mainstream culture as then, Child is Father tot he MAn I guess. Hope you and yours are well.