An excerpt from the new book: A Power Stronger Than Itself 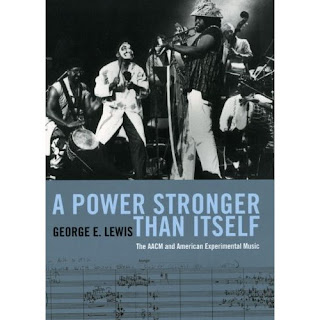 An excerpt from the new book: A Power Stronger Than Itself The AACM and American Experimental Music By George E. Lewis

For many musicians, the space race began not in 1957 with the Soviet Union’s launch of the satellite Sputnik, but in 1946, when the pianist Herman Blount came up on the train from Birmingham to Bronzeville. Soon after his arrival, Sonny (as he was called) landed a job with Fletcher Henderson’s orchestra at the Club De Lisa on 55th and State, a gig that he held down until mid-1947, when the Red Saunders Band succeeded Henderson. Sonny stayed on, rehearsing the band and refashioning Saunders’s backup arrangements for singers like Laverne Baker, Dakota Staton, Joe Williams, and Sarah Vaughan. Blount founded his own band in 1950, with people like saxophonists Harold Ousley, Von Freeman, Earl Ezell (later Ahmad Salaheldeen), and John Jenkins, bassist Wilbur Ware, and drummer Vernel Fournier.

Sometime in 1952, Blount announced that the Creator had ordered him to change his name. He went downtown to the Circuit Court of Cook County and legally became “Le Sony’r Ra.” In addition, he registered a business under the name of “Sun Ra.” Most musicians in Chicago, however, still knew him as Sonny, one of the qualified musicians of the South Side’s musical community. As Jodie Christian remembers,

My first encounter with him, he was playing stride piano, working at the It Club on 55th and Michigan. He was a good pianist, playing conventional piano, stride. We were playing, and Sun Ra was playing as a single pianist, a cocktail piano player opposite us. He hadn’t become “Sun Ra” then. I never heard anybody say that they remember when he started to organize this type of band, the space band. All of a sudden, it was there.

Around this time, as Sonny’s compositional palette became richer, he coined the term “Arkestra” for his band. “That’s the way black people say ‘orchestra,’” he observed laconically. At the Arkestra’s daily rehearsals, Sonny began to explicitly connect his music with projects of identity, philosophy, historical recovery, and mysticism. He explored the role of black people in the creation of civilization, and maintained that music could both change individual moral values and affect the fate of the world. The titles of his pieces began to connect two major themes—the infinite, Ethiopianist Zion of outer space, and the African mothership of Egypt, Ethiopia, and Nubia.

As anthropologist and Ra biographer John Szwed has noted, with Sun Ra, “music often seemed to be the subtext for some grander plan, one not always clear to the musicians.” Whatever the plan, Jodie Christian saw at first hand that Sonny’s disciplined domination of the Arkestra was absolute.

One day he was playing at Budland and the whole band was there, but Sun Ra wasn’t there. So I told John [Gilmore] and them, why don’t y’all hit and Sun Ra can come in later? “Naw, we don’t hit till Sonny comes in.” Sonny comes in an hour later. He ran in, sat down at the piano, and the band took their seats. You know what he said? “Let that be a lesson.” So at the end of the set I asked John, what was the lesson? He said, I don’t know, but Sonny said it was.

Alvin Fielder met Ra while working a dance gig on the West Side in 1959. “He asked me where I was from, and I told him I was from Mississippi. So he said, ‘Look, man, I bet you can play some shuffles.’” Sonny invited Fielder to an Arkestra rehearsal. “I was way above my head. I thought I was playing well, but as I look back, I’m sure that I wasn’t. Anyway, Sunny invited me to join the band. So I did.” Fielder played with Ra in 1959 and 1960. “Of course, the money wasn’t that great. But then again, as I look back, I should have been paying him.” Late in 1960, Sun Ra’s spaceship, with John Gilmore, Marshall Allen, and Pat Patrick on board, blasted off from Chicago for points east, eventually landing in New York City in January 1961. By 1962, the composer and pianist was preparing for an important New York concert with his Cosmic Jazz Space Group.

Philip Cohran had been working with the Arkestra since John Gilmore had brought him to a rehearsal in 1958. For Cohran, Ra’s example “opened my world up as a composer. I had written a few songs of merit before I got with him, but he taught me the one thing that really made a difference in my life, and that is: whatever you want to do, do it all the time. Once I learned that, there was no looking back.”

All the same, Cohran decided not to climb aboard for the Arkestra’s New York foray. “When I left ‘The Society,’” Cohran remembered, “everybody thought I was crazy. When I told Sun Ra that I was going to deal with my own thing, and I quit the band, I started studying on my own. I said, I don’t need nobody else to tell me what to do, I’ll just go ahead and do it myself. So I started studying every day.” In fact, during this time, the possibility of challenging the societal status quo drew many African Americans toward independent research into historical and spiritual knowledge. Richard Abrams says that “I always had a keen interest for looking into the so-called ‘occult arts,’ Around '59 or '60 I really started getting into that. One of the first books I read was Autobiography of a Yogi by Paramahansa Yogananda. It awakened something in me that needed awakening. I bought literature and bought literature, and ended up finding out about the Rosicrucians. I got in touch with them and hooked up with the Rosicrucians.”
Posted by Christopher B. Eddy at 6/06/2008 03:24:00 PM