New Release: New Horizons By Sun Ra And His Arkestra 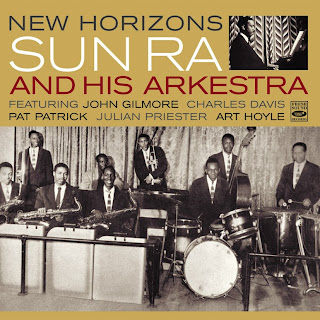 New Horizons By Sun Ra And His Arkestra - Deluxe Digipack

Chicago pianist Sun Ra emerged as a leader on the jazz scene early in 1956, when he assembled a group of neo-boppers that contributed to the original and exciting jazz sound offered by his new Sun Ra Arkestra, a medium-sized group that swung like a giant locomotive, an effect primarily due to an interesting use of two basses playing simultaneously. They featured the power of big band ensemble along with the excitement of combo blowing by fine soloists, among them the driving tenor John Gilmore, trombonist Julian Priester, and Hoyle’s well-directed trumpet. They played with swinging warmth and directness of emotion, but despite all this it was always Sun Ra’s musical personality which dominated the performances. He was a bandleader who dealt with the cosmos and its future and it’s worth hearing the new horizons of the first Sun Ra Arkestra. After all, they were busily turning the jazz cosmos itself upsidedown - and that is no small feat.