Henry Grimes and Marshall Allen: 2005 Spaceship On The Highway Tour 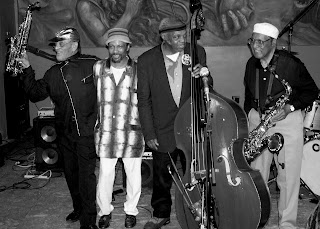 Yesterday evening I got a chance to witness two masters of Great Black Music perform. Unfortunately there weren't enough Black folks to experience their music firsthand. It's not like no one told folks about the show. It was listed in the newspaper, announced on the radio and even a mini-performance with an on-air interview the day before their engagement. That's right....the area Jazz snobs aren't as 'down " as they think they are. The show was fantastic. The itenerary is listed below. GO SEE THEM!!

I first met Marshall Allen about 30 years ago as part of the student stage crew assembled to present Sun Ra and his Arkestra at the University of Pittsburgh. I've never met Henry Grimes but I have been around a few of the people he has worked with. Most of the information that follows comes from their websites.

Marshall Allen is recognized all over the world as the premier avant-garde saxophonist. He plays the alto saxophone, flute, clarinet, oboe, kora, and E.V.I. (Electronic Valve Instrument).Marshall has lived, rehearsed, toured and recorded with Sun Ra almost exclusively for much of his musical career, leading the reed section.Marshall Allen led Sun Ra's formidable reed section for over 40 years (a role similar to the position of Johnny Hodges in the Duke Ellington orchestra). He is also one of the first jazz musicians to play traditional African music and what is now called "world music," working frequently with Olatunji and his Drums of Passion.

He assumed the helm of the Sun Ra Arkestra in 1995 after the ascension of Sun Ra in 1993 and John Gilmore in 1995. Mr. Allen continues to reside at the Sun Ra Residence in Philadelphia, composing, writing and arranging for the Arkestra much like his mentor, totally committed to a life of discipline centered totally on the study, research, and further development of Sun Ra's musical precepts.Marshall maintains the Sun Ra residence as a living museum dedicated to the compilation, restoration and preservation of Sun Ra's music, memorabilia, and artifacts. Marshall has launched the Sun Ra Arkestra into a dimension beyond that of mere "ghost" band by writing fresh arrangements of Sun Ra's music, as well as composing new music for the Arkestra. He works unceasingly to keep the big-band tradition alive, reworking arrangements of the music of Fletcher Henderson and Jimmie Lunceford for the Arkestra to play, along with many other American standards.

Master bassist Henry Grimes, missing from the music world since the late 60's, has made an unprecedented comeback after receiving the gift of a bass (a green one called Olive Oil!) from fellow bassist William Parker in December, '02 to replace the instrument Henry had given up some 20 years earlier. Henry Grimes played on some 50 albums with an enormous range of musicians, including Albert Ayler, Don Cherry, Benny Goodman, Coleman Hawkins, Roy Haynes, Lee Konitz, Steve Lacy, Charles Mingus (yes, Charles Mingus), Gerry Mulligan, Sunny Murray, Perry Robinson, Sonny Rollins, Roswell Rudd, Pharoah Sanders, Archie Shepp, Cecil Taylor, Charles Tyler, McCoy Tyner, Rev. Frank Wright, and many more ... and then one day in 1968, for reasons largely related to troubles in the music world at the time, Henry Grimes left New York. He took his bass and drove to San Francisco with drummer Clarence Becton to work with Jon Hendricks, Al Jarreau, and others. When these gigs were over, and not finding enough work in San Francisco to survive, Henry took his bass (by then in serious disrepair) to Los Angeles, finding some music work at first while living in a house with pianist Lamont Johnson and a group of musicians working with Lamont and all following Scientology. Henry did not want to join Scientology, and the group eventually closed the house and left town without him. Henry's bass was now no longer playable, so he took it to a repair man who gave him a high price for the necessary work, and since Henry was unable to pay, the repairman gave him a small sum for the bass instead, Henry apparently believing he'd be able to get it back after a while. Sadly, this turned out not to be the case.

Many years passed with nothing heard from the great Henry Grimes, as he lived in a single-room occupancy hotel in downtown Los Angeles and sustained himself with survival work not related to music (construction, maintenance, janitorial, etc.), writing many handwritten books of poetry, philosophy, and metaphysics, and studying yoga.

He emerged from his tiny room to begin playing concerts with Bobby Bradford, Nels and Alex Cline, Joseph Jarman, and others at Billy Higgins's World Stage, the Howling Monk, the Jazz Bakery, and Schindler House in the Los Angeles area in early '03. (Henry received a Meet the Composer grant for his work in one of the California concerts). On his triumphant return to New York City in May, '03, Henry Grimes played as special guest on two nights of the six~night Vision Festival, gave live concerts and lengthy interviews on the air daily during a five~day WKCR Henry Grimes Radio Festival, and offered a bass clinic before 50 New York~area bassists who haven't stopped talking about him since. Henry Grimes is playing at the very height of his artistic powers,just as though he had never stopped at all! Still in his sixties, he's healthy and strong, and his gentle, humble bearing and courageous life story have inspired all those privileged to know him, hear him, play music with him.