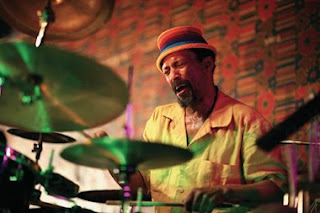 Avreeayl Ra and Robert Barry have spent decades holding down the drums in Chicago jazz bands. Each played with the great Sun Ra. Both musicians were kind enough to sit down and share some of their experiences with STOP SMILING.

Stop Smiling: How did you start playing music?

Avreeayl Ra: I started with drums. I was just at home practicing by myself. I didn’t have a teacher or anything.

SS: Had you ever played music before?

AR: No. I was 21 when I first got interested and bought my first set. I had a friend who I went to school with and he was taking lessons. He had a little practice set at his house. I used to go there, and we used to hang out and just mess around.

SS: What kind of music were you playing?

AR: I’d been listening a lot to Coltrane and Shepp. I guess I had what you’d call a sophisticated listening habit before I started playing. I started playing like Trane, Elvin and McCoy. But I got a job driving a cab specifically to buy the set.

SS: Once you got the kit, did you quit the job?

AR: Yeah. One night, around two or three in the morning, I picked this cat up and he had three horns with him. I was telling him I wanted to get me a set of drums. So we talked. I was taking him home. I told him that my father played tenor. He said, “Oh yeah, who’s your father?” I told him they called my father Swing Lee O’Neil — that’s my original last name. He said, “I’m playing with your father.” They were playing together in the Bread Basket band. It was Ari Brown.

When we go into schools and talk with kids, I sometimes tell them that story as a source of inspiration for them. It was just a dream of mine: I wanted to play, and I was driving a cab to buy a set of drums, and I ended up picking up Ari.

SS: Did it take you a long time to learn? Obviously, Elvin and Coltrane are dealing with some advanced musical concepts.

AR: Yeah. In fact, I didn’t consider it hard, but I didn’t know any better. My older brother had musical experience. He played clarinet in high school, and my other brother played snare drum in a marching band. I remember when I was in grammar school, he took a trip to Texas. That always impressed me. He was a big part of my influence — my brother, Glenn. He is seven years older than me. He used to take me out there by the water on 63rd Street. He used to play congas out there, and that turned out to be a great influence on me and it still is.
I would go out early in the morning and set up my stuff, and then later in the evening I would go over where the drummers were and play with them.

SS: You worked with Phil Cohran, too?

AR: Yeah, Phil was the first group I played with. When I first started going around him trying to get lessons — it was somewhere around 1969, maybe ’70. He had Brother Atu teaching him African drums. I started studying with him. I think they called Atu him Black Harold. (Harold Murray was his given name.) Harold and Phil were my first teachers. Harold, Phil and Eugene Easton. When the group split up, most of the group was in the Pharoahs. When I was with Phil, I wasn’t playing traps, although traps were my first instrument. When I started playing with Phil, I had congas — I was studying congas and soprano saxophone. I was studying with Phil and Eugene Easton: Phil was teaching us theory and I was learning technique from Eugene.

SS: Had you already been playing congas or African drums?

SS: He was just playing free at the time?

SS: Did you ever play with your father?

AR: Yeah. In fact, before he died we got to play in several of groups together.

SS: I remember you mentioned that he taught John Gilmore a little bit.

AR: Yeah, he was a mentor to Gilmore, to a lot of the cats around the city I didn’t realize. Ed Wilkerson told me that he used to mentor him a little bit. He was very inspirational to younger cats. Gilmore told me this. I didn’t learn this from my father because he had died.

Robert Barry was in the group around the same time as my father, and Sun Ra used to also work with my father — whoever would get the gigs. Barry told me that they had a trio and they would work two or three times a day. Back then, music was really happening: they would do brunches and afternoon sets, and then in the evening they would play more.

SS: When was the first time you played with Sun Ra?

AR: I guess it was in 1984. Rollo Radford called me saying they were playing down at the Chicago Jazz Fest, and that Sun Ra wanted me to come down. There was a sound check that afternoon. I got down there, and Pete Cosey was there. I felt a little more comfortable, because there was somebody I knew. Sun Ra was playing the piano. I didn’t want to disturb him. But he’s still so into it, he ain’t looking at me. After a while I said, “Excuse me, Sun Ra. I’m Avreeayl.” He said, “Yeah, I know who you are.” Anyway, I came in with my drums — that’s all I could figure. Sun Ra wasn’t a man of many words with me. I was waiting for him to give me some instructions. He said, “Go on, set up.” So I go to set up and already on the stage are Wilbur Campbell and Rashied Ali. I just remember thinking, “I’m not going to set up in the middle between these cats.” [Laughs]

I set up my set so that Rashied Ali would be in the middle. So Wilbur Campbell was on one end, Rashied Ali was in the middle and I was on the right side. At one point Sun Ra said, “Drummers, y’all kick it off in 7.” So I’m playing in 7 and I guess Wilbur is too, but Rashied Ali is doing some different kind of stuff. I’m paying attention to what I’m doing. When we finished that section, Wilbur Campbell came over to Rashied Ali saying, “He was saying 7.” And Rashied Ali said, “Yeah, I was dividing the 3 into the 4.” [Laughs] I remember Wilbur just looked at him. It was some heavy shit. He didn’t know what he was talking about and I didn’t know what he was talking about, but he didn’t want to question it. But this opened up my consciousness to look at things in different ways. It really stayed with me. It kind of opened up my consciousness in a way of, “Okay, check that out.” Being with Sun Ra was like that: It expanded your consciousness, and provided a different way of looking at things.

SS: Do you focus on the healing properties of music?

AR: Yeah. Going back to my first influences: Phil Cohran taught us music from a healing perspective. And it was more than just music; it was a way of life, hygiene and diet. He used to take us on the railroad tracks and show us plants that were edible, in case of emergency. In some kind of way it would all translate into the music. He would take Ubangi Makala out on the lakefront, over by Larrabee Street. I don’t know if it was Sundays or what, but we would go to catch the sunrise. Even in the winter. I can see us sitting in the front seat of his car, waiting for the sunrise and he was playing the kalimba. He may have been first influenced with the healing aspect of the music through Sun Ra. He certainly exposed us to the healing aspect of the music. It was interesting. He would write out our music in different colors and the notes pertaining to the vibration per second of the color — things to open up our consciousness on different levels, meditation concepts. He had us heavily into the voice-long toning. He was teaching us back in the late Sixties.

Now I’m more inspired with the healing aspect of the music. I’m getting back into it. This music is very powerful in that regard, and through principles of resonance you are able to bring people up to that vibration. You provide a porthole for them to experience that with you. It is very fulfilling when people give me feedback on how the music made them feel and let you know that you’re right on the money, that your intention was understood.
Posted by Christopher B. Eddy at 6/18/2008 12:09:00 PM