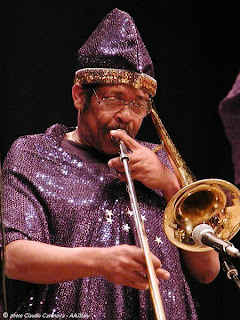 Text by K W Billerts based on an interview with Tyrone Hill in October 2000.

"I never heard music like that before. They played for 6 hours, 9pm to 3 in the morning, straight thru. No breaks. It was unreal..." These were some of the comments made by Tyrone Hill, trombonist and at that time, member of Philadelphia's Uptown Theater Orchestra about his first performance with jazz legend Sun Ra. Ra had just moved to Philadelphia from NYC, part of the non economic strategy employed by the visionary composer, keyboard master, band leader and all around cosmic being. It was 1969. Ra had called looking for a trombone player. It turned into a lifetime calling to the spaceways of the Sun Ra Arkestra.

"To be perfectly honest I wasn't really familiar with Sun Ra. I was familiar with guys in the band, Pat Patrick, John Gilmore. But my brother said that's a really heavy band. So I went and rehearsed with them. Other guys from Philadelphia were there, Keno Speller, Byard Lancaster. Oh it blew my mind. I had never played with a band like that, it was totally different. We played at Slugs, down on 3rd Street on the lower East Side. That was the first place I played with Sun Ra...then there were the people in the audience, Mingus, Monk, Miles... Sun Ra playing the organ behind his back! It changed my life. It changed a lot of my concepts about the importance of music. He really opened me up. He showed me that there's a lot of possibilities beyond what I was feeling. 'Tyrone, you playing what you know, play something you don't know.' Sun Ra always taught us to do the impossible. To do something you don't know. That you don't know about. That's totally impossible, like Christopher Columbus. What he did was impossible. They told him the world was flat. You gonna sail off the edge of the world. You gotta do the things they tell you you can't do... He used to call his music being tailor made, like going to a tailor and getting a suit that only you could wear. Sun Ra would write me a trombone part that only I could play. Even JJ Johnson couldn't play it...he and Duke Ellington were the masters at it."

The neighborhood around 17th Street and York in North Philadelphia was home to a lot of great musicians in the 50's and 60's. Sherman Ferguson, Middie Middleton, Odean Pope and John Coltrane were just a few of many. Some of Tyrone's earliest musical memories are hanging out at 17th and Cumberland harmonizing back in the doo wop days. Street corner serenades and checking out this handful of cats who always looked a cut above, who seemed like they were on to something. Cats that included cousin Freddie Paulin, a member of some of Tyrone's own groups these days, who encouraged his interest in music back then. Fate, in a pleasant mood, offered music education on a quality scale those days in the public school system. Digging Miles, the king of cool, trumpet was his first choice but a trombone was the first to make the trip home. "I fell in love with the trombone, it was an instant thing. I was playing it the first day I got it...the trombone is just like the human voice, with the slide you can get quarter tones, eighth tones." One of the first impressions you get hearing Tyrone is the sheer sound and power of his playing. His playing has been described as leather lunged. He laughed at the description, "...I get a pretty strong sound...I used to go hear the bands. I would watch the trombone players. It was like I could never really hear the trombone players...(so I said) if I play the trombone you're gonna be able to hear it...I play out."

Most of the popular music in North Philly those days was R&B. Tyrone soon became part of the Gamble & Huff scene of the 70's and 80's, when 'Me and Mrs Jones', 'Expressway to Your Heart' and other hits put the Philadelphia sound on the national charts. And then with the Uptown Theater on Broad Street in North Philadelphia. The Uptown was like the Apollo in NYC, the Howard in D.C., the Regal in Chicago, all hotspots for black music, dominated then by the Motown sound. Under the leadership of Sam Reed on sax and keyboard player Leon Mitchell, the band backed up Martha and the Vandellas, the Tempations, Smokey Robinson, James Brown and every other big time R&B act to make it thru Philly. Supporting Motown starpower turned into a graduate school of musical training that lasted over 10 years, touring at times with many of the groups, Stevie Wonder among them. And 7 years as musical director for Billy Paul. "Then Sun Ra turned my whole thing around." There were a dozen years from that fateful first gig at Slugs in 1969 before Tyrone formally joined the Spaceways. During that time he was still 'half on earth' playing frequently with the Arkestra yet still maintaining his planetary, often economic ties. Musically, he began to appreciate some limitations. He understood the music better but still couldn't express what Marshall Allen and John Gilmore routinely put out. And Ra would chide him for staying with those Earth bands saying, "When death comes you're gonna be put in your place, why don't you take your place (in life) now?" It was time to move into the band residence on Morton Street and get the full dose of Ra-ality.

Tyrone's reverence and regard for Sonny (Ra) are unmistakable. Sun Ra was a lot more than a musical mentor or the colorful jokester who once gave then President Richard Nixon '24 hours to get off the planet'. "Something else that attracted me to him was his philosophy. He used to say, 'Music soothes the savage beast.' You could change the world with the right kind of music. It's in the Bible where they talk about how Joshua blew the walls of Jericho down. He did it with 4 trumpet players. Blew the walls down with music! Sun Ra believed if you play the right kind of music, that positive music could change everything. We'd be playing a concert. People were dancing. (Someone asked,) 'How you gonna get them to outer space? How you gonna take them to outer space?'...with Music." At this point Tyrone's tone of voice carried the conviction of a missionary testifying to the one true faith. There is no question. To one blessed to ride Sun Ra's rocketship to that exhilarated state of grace, the leap of musical and all faith that Sun Ra taught, there is no doubt. The openness of being, the welcome to existence stand apart from everyday experience like galaxies to a spinning ball of clay. Like the endlessness of outer space. That only Ra knew well.

"We had been on gigs where he played the band. He used the piano like playing follow the leader. You see these flocks of birds flying together. All kind of ways. (But) all flying together...(sometimes) he wouldn't even tell us what we were going to play. Marshall (Allen, present director of the Arkestra) works like that. You gotta be tuned in. Or you'll be left behind. He would play the first 8 or 12 bars of a song...then you get the music out and he'd play something else...(it's all about) group improvisation, thats the basic foundation of jazz. Everybody's got to be together. A lot of musicians can't do that. Whatever you play, everybody's gotta be on the same place. With Sun Ra, he was sort of like a catalyst. All these ideas, musical forms just moving around him... Sun Ra didn't like the word freedom, he liked discipline. It takes a lot of discipline to play this music. You have to know when to play it (free) and when not to." Which is why the band rehearsed and rehearsed. And rehearsed. All times, night and day. The practice regimen of the Arkestra was legendary, subject to the limitless inner drive of their insomniac visionary, Sun Ra. "...Ra would say, 'Tyrone, make your trombone sound like a flying saucer, don't make it sound like a trombone.' ...when the band plays good and when it's really right theres nothing in the world like it. That's why I've been playing with this band for 30 years...its really special to do something with a group of people, to do something creative."

Sun Ra left this planet back in 1993. John Gilmore assumed leadership of the band and has since passed on as well leaving the band under the experienced direction of Marshall Allen. Marshall of the staccato cries, the seering and soaring alto, possessed of a musical sense of humor that can walk miles in any man's moccasins. During that time the band also unexpectedly lost James Jacson, bassoonist, flutist, infinity drummer and long time resident of the enclave on Morton Street in Germantown that has been home to the spirit gang for 30 years. Jacson was the one who inherited the rowhouse destined to be a museum sometime in and probably of the future. Reflecting on losing Gilmore and Jacson, Tyrone sighs and shrugs his shoulders in resignation to his increased responsibilities in the band. "A shock. Thats an understatement. We gotta keep it going. The music never stops. Sun Ra used to say that. John carried it on. Then he passed it on to Marshall. Under Marshall, this is the best the band has sounded yet...Marshall used to be a section man, he was out of the big bands...(he's used to) a lot of tight ensemble playing."

These days a lot of that tight sound depends on Tyrone's leadership in the horn section of the Arkestra where his powerful sound punctuates and inflects turning points as the band wheels over the extra-terrestrial dreamscapes of Sun Ra and their own compositions. He has found time to head up his own group, the Deep Space Posse featuring some of his own music as well as Sun Ra's. It's part of the growing collective, the Satellites of Sun. Along with California and NYC editions, the Philadelphia Deep Space Posse features leading edge talent like Elliot Levin, Rick Ianacone, Howard Cooper, Calvin Weston, Bobby Zankel, Freddie Paulin, and others. "It gives me a chance to play with some other musicians. A chance to hear the music in a different context." Sun Ra warned the band that he wouldnt be around forever despite media reports to the otherwise. "We're going thru changes. Marshall said you cant live off what Sun Ra did. Sun Ra taught us well. He was special. He kept us laughing, always cracking us up. We have fun playing."

Somewhere along the ways of the past 30 years the leather lungs and heart have come together and are sitting happy in one beautiful individual who has since become one of those 'cats' he admired back when around 17th Street. Once a year you can even find him wearing another hat. Taking part in Philadelphia's unique answer to the Mardi Gras, the Mummer's Parade. "...Mummers, its something I enjoy doing. Everybody puts everything aside, the races, what you think, what you are. You just watch the parade and have a good time. People doing things together. Beautiful things, creative things. If you can do something beautiful for somebody else, why not. Thats my mission. Keep playing music. I was playing with this R&B band. This guy came up to me and said, ' you tune me up, I'm out of tune.' And when I was finished the guy gave me a hundred dollars. (He said), 'thank you you tuned me up.' I thought about what Sun Ra said. Thats what we gotta do for people... tune them up."
Posted by Christopher B. Eddy at 6/17/2008 08:54:00 AM