In the late '80s, Philadelphians his age were raving about the high-flying slams of 76ers' Julius Erving. Not Farid Barron. He venerated jams of a different sort. While his contemporaries were running up and down city courts imitating the latest Dr. J dunk, Barron was holed up in his basement banging out jazz tunes on the piano, like "All Blues" by Miles Davis.

"I guess growing up, I was a piano nerd," said Barron. "But since I played jazz, I still was a cool cat."

Barron's level of coolness may have multiplied tenfold with his latest gig -- pianist for virtuoso trumpeter Wynton Marsalis and his Lincoln Center Jazz Orchestra. The 25-year-old senior airman, assigned to the Air Force Band of the West at Lackland Air Force Base, Texas, took two months' leave earlier this year to perform in Marsalis's jazz opera -- "Blood on the Fields."

Marsalis, an eight-time Grammy winner, discovered Barron at Philadelphia's Central High School, where he was playing in the school band. The jazz great, credited for spurring a neoclassical renaissance in the medium, was assembling a group of young musicians to perform Duke Ellington tunes and asked Farid to join the band.

"That whole experience was very exciting, and it made me think that I might have what it takes to make it in music," said Barron, a wiry man, who sports a pencil-thin mustache.

The musician, however, enrolled at Drexel University, majoring in electrical engineering. He soon doubted his decision.

"I was sitting in my first calculus class wondering, 'What am I doing here?' " said the airman, whose father is a Defense Department civil servant and former Air Force member.

Over the next year and a half, Barron bounced between several colleges, studying music and finally dropping out in 1991. Soon after, he auditioned for Marsalis's septet, getting the gig and replacing Marcus Roberts, who was pursuing a solo career. The pianist toured the States, South America and Europe, playing more than 100 dates and performing jazz standards from Marsalis's three-CD set "Soul Gestures."

"It was a weird experience -- we were getting treated like movie stars," Barron said. "I was having trouble just learning the music, let alone dealing with the press and public. I knew I wasn't ready, but you don't say no to somebody like Wynton -- he's a legend."

The pianist said when he went into the studio to record the septet's "Citi Movement," his inadequacies and weaknesses came to light, and he was soon let go by Marsalis.

"I wasn't versatile enough," said Barron, who first dabbled on the piano at age 7. "I hadn't learned all the standards or been exposed to enough music. I was like a writer who hadn't read enough of the classics."

Marsalis offered to send Barron back to college, but Barron suggested he needed a more practical education so the band leader bought him a Steinway piano instead. Over the next year, Barron tickled the ivories with different bands and musicians, including Ralph Peterson's Hip Pocket Quartet, Micky Roker of the Modern Jazz Quartet, Fluegelhornist Johnny Coles, and Jazz Futures II with the youngest Marsalis brother, Jason.

Barron was playing at Ortliev's Jazz Haus and living above the Philadelphia club when he enlisted in the Air Force in November 1993.

"I was married, and my wife, Cherice, and I needed some structure and stability in our lives," said Barron, who has a 2-year-old son, Kuba. "At that time, I didn't have any sense of direction. I wasn't focused nor making any progress musically."

For the past four years, he's toured with Air Education and Training Command's Band of the West throughout Texas, Oklahoma, New Mexico and Louisiana, playing at high schools, colleges and civic auditoriums. Barron is currently a keyboardist with the Nighthawk ensemble, a 10-piece jazz horn band, playing synthesizer as well as piano.

"My tastes have become much more eclectic since I joined the military," Barron said. "The job requires us to play many different styles of music, everything from the 'Macarena' to Stravinsky's 'Firebird Suite.' If it weren't for the AETC band, I wouldn't even listen to this music, let alone perform it."

Besides expanding his repertoire, Barron gained more control over the piano and developed a better understanding of his role in the ensemble. As a result, his technique has evolved, becoming more orchestral. Also, his bandmates say he plays a mean triangle in the concert band.

"The Air Force really prepared me for this tour," Barron said. "There's a lot of great pianists that Wynton could've chosen, and I'm honored he picked me."

Barron performed before sold out audiences on a 24-city American and European tour, premiering Jan. 28 in New Haven, Conn., and closing March 18 at London's Barbican Theatre. The concerts received rave reviews from newspapers like the New York Times, Los Angeles Times and The Times in London.

"It was a joy," Barron said. "It was wonderful getting to play with musicians of this caliber. It gave me an opportunity to assess my development and compare it to the elite. I can say the Air Force gave me an advantage. The service has taught me integrity, dedication and a devotion to the 'mission.' "

Marsalis agrees, telling Barron that his father, Ellis Marsalis, a New Orleans pianist and ex-Marine advocated that all young men and women should join the military to gain discipline and a sense of duty.

"The Air Force has really improved Farid's work ethic," Marsalis said. "Although he's always been a hard worker, the military has had a tremendous impact on him. I can hear it in his playing and in his attitude ... plus he's a better dresser and keeps his room clean."

Barron said during the tour some bandmates urged him to get out of the military and pursue a more lucrative civilian musical career. The pianist, however, is in no hurry to separate from the service, and said what he'd really "dig" is performing with the Airmen of Note -- the Air Force's premier jazz band based at Bolling AFB, Washington, D.C.

"I still have much to learn and gain from the military," Barron said. "My family isn't ready to make that step on the outside, yet. That time will come." 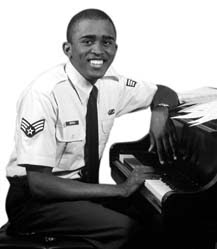 Farid, it was a pleasure meeting you and watching you and my son Pyerce Oates having fun in Philly at the Tony Williams Scholarship Jazz Fest and on stage with Bill Cosby. I am inspired by your fantastic story here and will have Pyerce read it to gain more understanding and appreciation of the man you are. Thank you and I hope that you continue to influence my son with your playing. Nice meeting you and shaking your hand. I hope that my son (Pyerce) will stay in touch with you! I too am a Vet (Navy) and I appreciate your service to our country. God Bless you! Devearl Oates

Wow, Farid Barron!! I haven't seen you since you lived here in Friend's Co-op and also played at my Dad's memorial service (Carl Kukcinovich). Are you still in Philadelphia? I would love to get in touch with you. Blessings, ~Sonya Kukcinovich Hill (Jared Hill's Mom)